CANBERRA, Australia — Australia’s new Parliament House in Canberra is a striking piece of architecture, built into a hill and utilizing natural Australian materials. 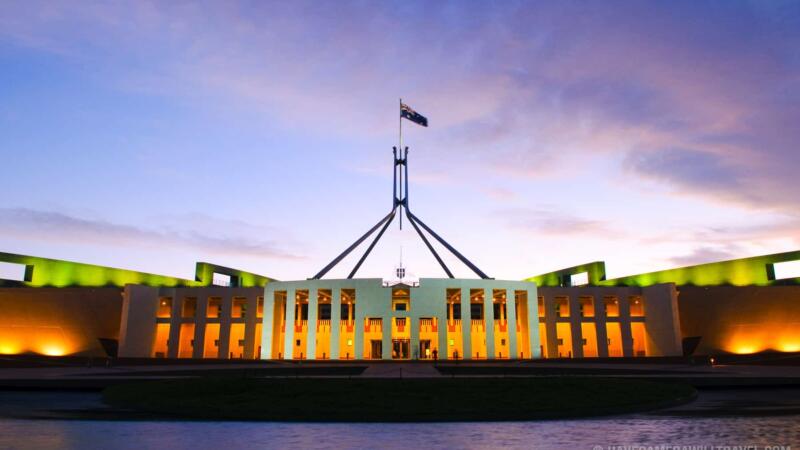 Canberra is often known as Australia’s “bush capital” and has long had a poor reputation as a place to visit. The general perception is that it’s a place to be endured if you work for the federal government but not a place many people seek out. While it’s never going to compete with the sparkly gems of Sydney, Melbourne, the Blue Mountains, the Great Barrier Reef, Uluru, or the Top End when it comes to tourism, I was pleasantly surprised on a recent trip back.

It doesn’t take long after arriving to see why Canberra has a poor reputation as a travel destination, especially if you arrive after regular business hours. But a visit to the Australian Parliament Building is, I’d submit, one of the two tourist activities that make a detour to Canberra worth the effort; the other is a visit to the Australian War Memorial. Canberra simply wouldn’t exist if it hadn’t been created to break the deadlock between two rival cities, Sydney and Melbourne, trying to gain an advantage by laying claim to being Australia’s capital city. The compromise reached was to stick the capital out in the middle of nowhere nominally partway between them. One has to wonder whether the decision was made just to punish everyone. It’s no wonder that some recent Australian Prime Ministers have chosen to spend more time in Sydney’s Kirribilli House than at Canberra’s official Prime Ministerial residence, the Lodge.

Serving as the central hub of Canberra’s self-consciously planned city layout, the Parliament Building is home to the Australian Commonwealth Government with its two houses of Parliament, the Senate and the House of Representatives. Although it is based upon the British Westminster system, there are some notable differences, not the least of which both houses are elected in full; there are none of the inherited or appointed seats of the British House of Lords.

Visiting the building is both free and easy–for the headquarters of a national government, it’s a pleasantly low-key place. In contrast with visits to most seats of national governments, there’s ample parking, no lines to speak of, and minimal inconvenience with security measures. Australian Federal Police are around, but they keep a commendably low profile. Visitors are welcome to roam throughout the building and, indeed, over it.

It’s certainly a striking bit of architecture. The most unusual part is that the building is quite literally part of a hill. Covered in grass, the building itself creates the peak of Capital Hill (not to be confused with Capitol Hill in Washington, DC, which is where the U.S. Capitol building is (ie. where Congress meets).

As you would expect of a building built from the ground up to be architecturally representative of an entire nation, symbolism is everywhere, from the aboriginal art tile mosaic adorning a large island on the courtyard to the choice of materials and colors used throughout the complex. And it’s no accident that the low, wide curve of the entire building as seen from the front looks not unlike the shape of a boomerang, a traditional hunting weapon of the Australian aboriginal peoples.

The interior of the building is both spacious and sparse. What could so easily have felt like a charmless bureaucratic office building feels much more welcoming and pleasant thanks to the pervasive use of natural light, natural fibers, and natural timbers representative of Australian resources and industry.

The flag pole that sits atop the center of the building is not what you’d call subtle. Protruding 81 meters (266 feet) and supported with a massive quadripod, it’s designed to be visible for many miles around. (And, presumably, it also acts as one giant lightning rod.) It is made of 240 tons of Australian stainless steel and tower above anything else in Canberra save the radio tower on nearby Black Mountain.

Just down the hill is the Old Parliament House, now the home of the Museum of Australian Democracy. The building has been the site of many famous and infamous Australian political battles and the scene of some of Australia’s most passionate political activism. Antiwar protesters staged pitched confrontations with police there in the 1960s and 1970s to protest Australian involvement in the Vietnam War, and there remains to this day an Aboriginal Tent Embassy set up on the front lawn. Dating from the early 1970s, the encampment’s residents maintain a presence to campaign for Aboriginal land rights.

It was on these steps in 1975 that freshly sacked Prime Minister Gough Whitlam uttered the famous quip, “Well may we say ‘God save the Queen,’ because nothing will save the Governor-General” after the Queen’s representative in Australia, Governor-General Sir John Kerr, dismissed Whitlam’s government and sparked a constitutional crisis in the process.