CANBERRA, Australia — The Australian War Memorial in Canberra has real personality and a fascinating story of ANZAC to tell. 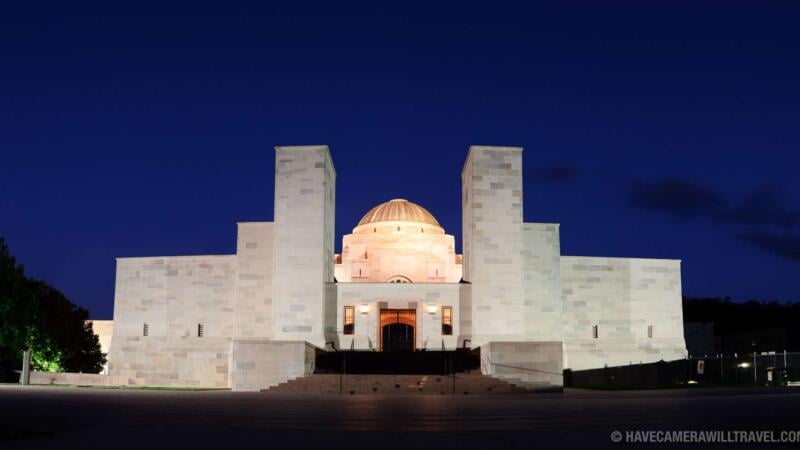 The Australian War Memorial in Canberra has real personality, and it has a fascinating and important story to tell.

Why would you want to go to Canberra? That’s a fair question, and one that’s been asked more than once. For good reason, Canberra doesn’t have a great reputation as a top-tier travel destination. Considering it’s a national capital, it has none of the world-class drawing power of Sydney or Melbourne, or, at around 350,000 people, nowhere near their populations; it most certainly is not in the league of London, Paris, Washington, Berlin, or Tokyo. It was a city born of compromise, and compromise still very much hangs over the city. At the time of Australian federation, at the turn of the 20th century, both Sydney and Melbourne were vying to become the Australian capital. Neither gained the upper hand, and competing political and business factions struck a deal that resulted in the establishment of a new, planned city part way between them (in reality, it is much closer to Sydney) within its own territory (Australian Capital Territory), effectively forming a federal government enclave within the state of New South Wales. And it’s the very presence of the seat of the federal government that instills significance and symbolism to institutions seeking to influence policy but also to act as guardians of Australia’s cultural and historical memory.

But there are a handful of very good reasons to venture to Canberra, and two of the best are to visit Australian Parliament House and the nearby Australian War Memorial.

The Australian War Memorial is really two related parts. At the complex’s center is the domed Hall of Memory housing the Tomb of the Unknown Soldier. The walls of the cloisters on either side list those who have died and are often adorned with symbolic poppies. It makes for a quiet and solemn tribute to those who have died in war for Australia. Significantly and symbolically, it stands in direct and unobstructed line of site from Australia’s Parliament House.

The second part is a museum dedicated to Australian participation in wars. And there have been many–the experiences of war make a major contribution to the makeup of Australia’s cultural heritage and national self-image. What makes it even more remarkable is that Australia has always participated alongside more powerful allies–notably Britain and the United States–and at times such as World War II, its troops have been committed “over there” even when “over here” has come under direct military attack.

The Australian War Memorial Museum is patchy, uneven, and some of it is cringingly dated. And thanks to some odd decision making, the most dated and cringe-inducing sections are the ones you first see when you walk in. The last time I was there was almost a quarter of a century ago, and when I walked in again recently I could have sworn nothing had changed. Luckily I didn’t walk out in the first half hour, though–the newest and best exhibits are deepest inside the museum and furthest from the entrance. They’re very impressive indeed and make the visit well worth the effort.

The Australian War Memorial has real personality, and it has a fascinating story to tell. Less encumbered by the political correctness that restrains the storytelling of some of its American and British counterparts, it is nevertheless respectful of once hated and feared former enemies like the Germans and Japanese. War Memorials cater to veterans’ groups, and not surprisingly veterans often have rather strong views on how to present the history and causes for which they risked their lives. But the museum overall does a commendable job of letting history trump legend.

The most dated exhibits includes a hodgepodge of artifacts and memorabilia scattering amongst a truly impressive array of model dioramas depicting significant battles and scenes. I can’t think of seeing such a collection anywhere else, and if they seem a bit quaint and old-fashioned, they nevertheless contribute to visualizing the conditions of war. And diorama aficionados will be in heaven.

But it’s the more modern exhibits that really shine. Visitors can stand on the bridge of the HMAS Brisbane, watch fascinating immersive sound and light shows on a Lancaster bombing run and the history of fighter aircraft.

Photos of the Australian War Memorial 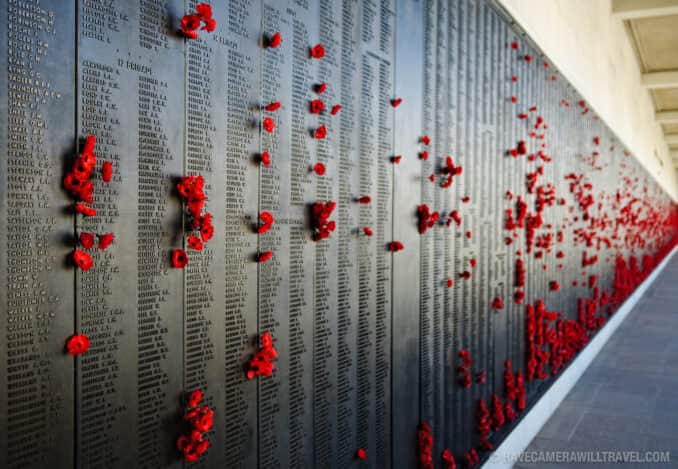 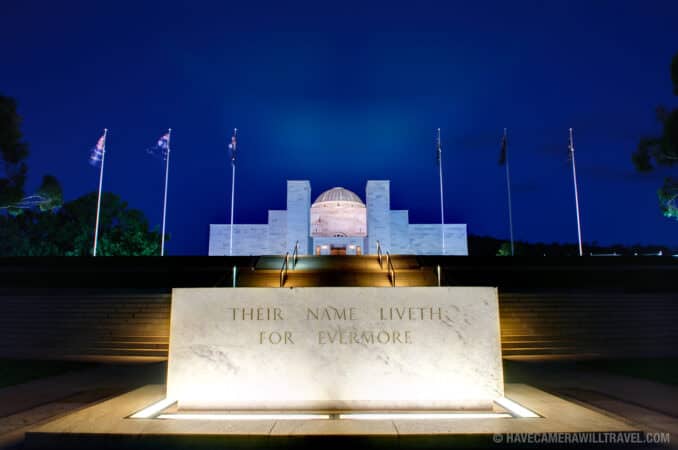 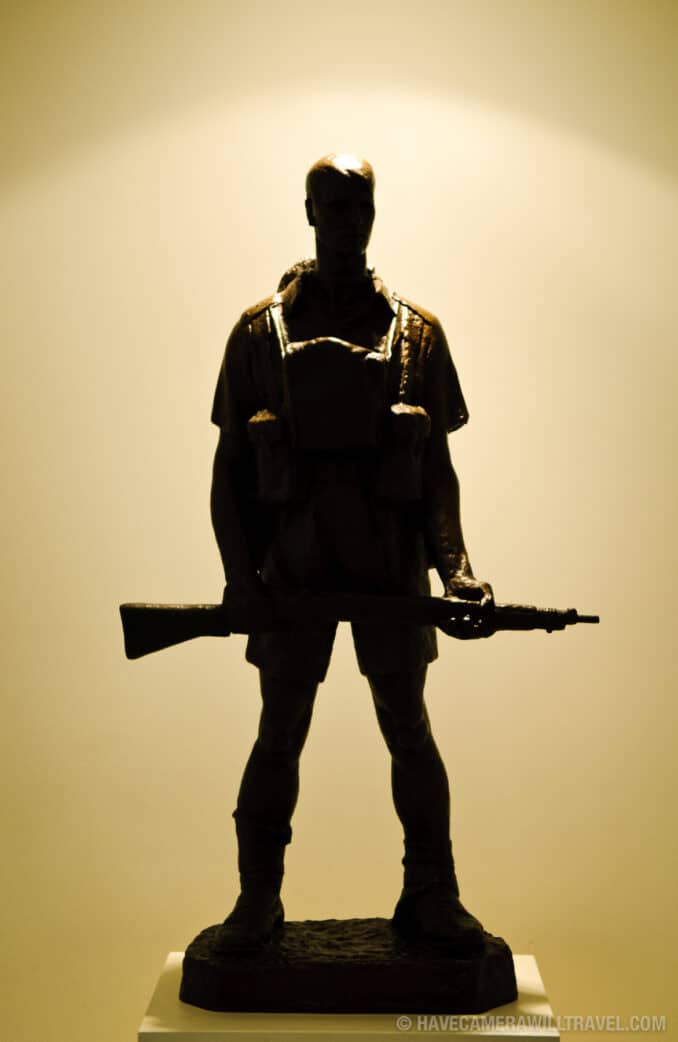 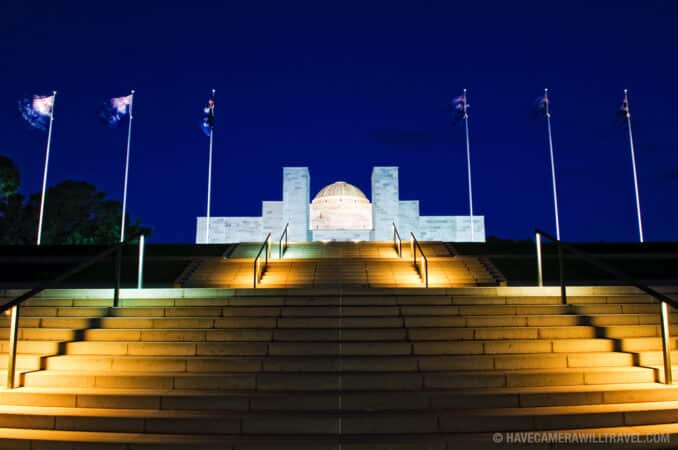 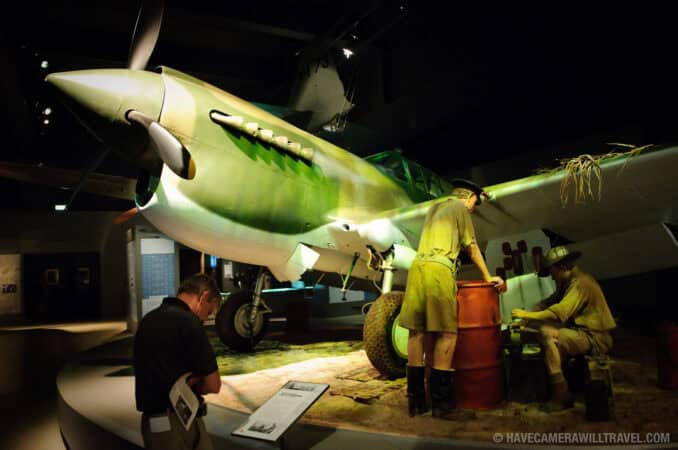 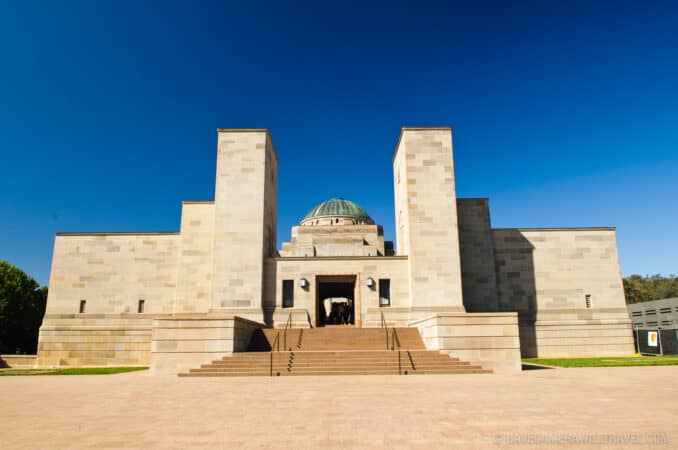 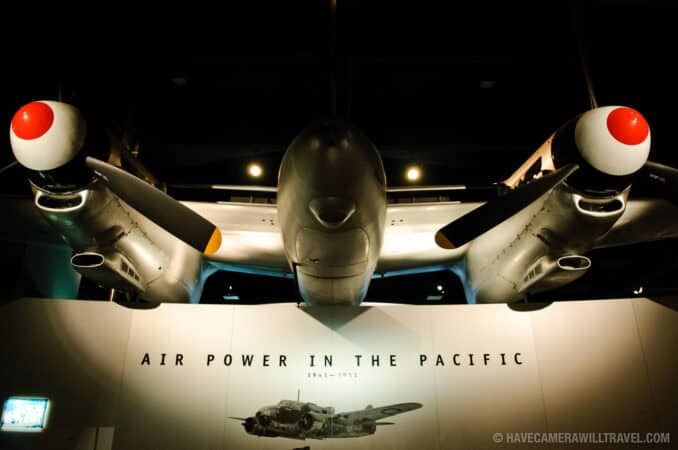 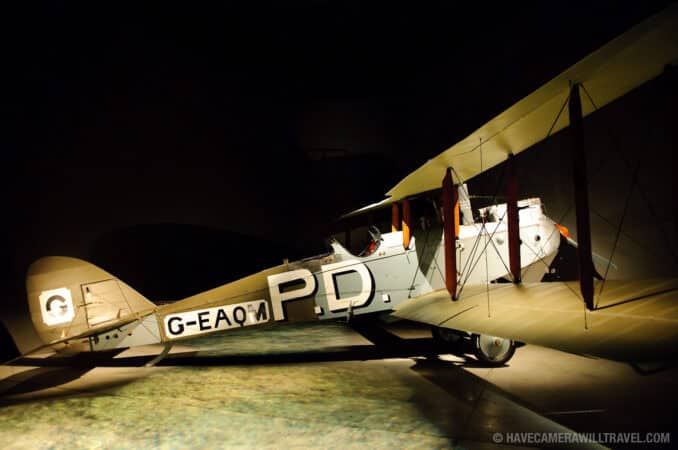 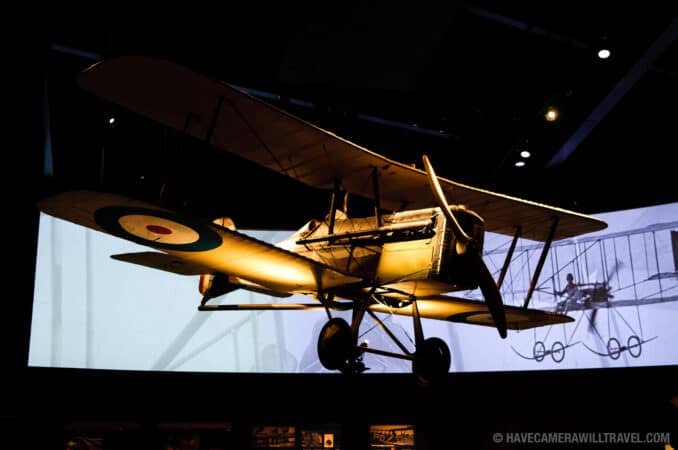 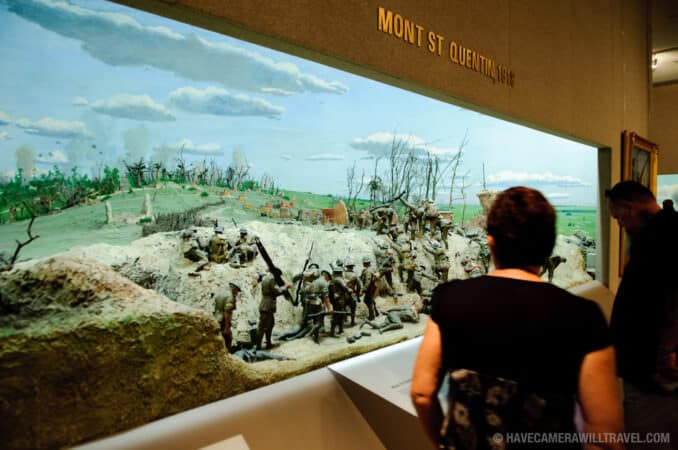 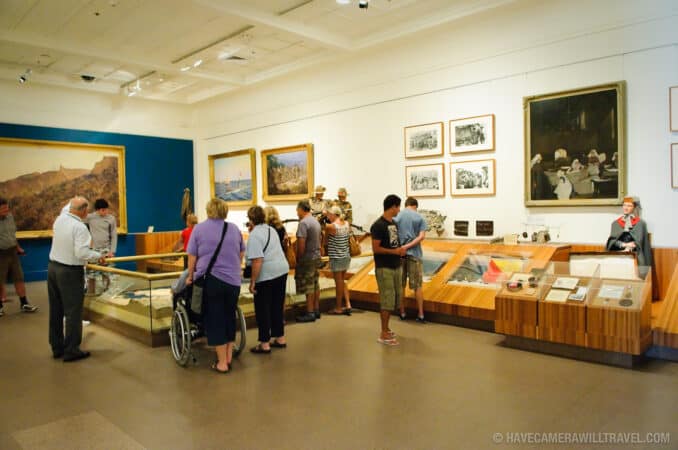 It is remarkably photographer-friendly, and their attitude was well articulated by the security desk officer when I asked if flash photography was allowed: “yep, no worries.”

For hours and other visitor details, see the Australian War Memorial website.

Being an easy 3 hour drive southwest from Sydney, Canberra isn’t exactly on the way to anything else, but it is easy to get to. There are also regular flights from many Australian cities, along with intercity train and bus services.

The city’s layout is a series of uninspired geometric patterns. And however much this constrains urban character, it does make it easier to find one’s way around.

If you really want to see the Australian War Memorial at its finest, go for Anzac Day (April 25), but be prepared for crowds, make your hotel reservations early, and start early with the dawn service.