The Beautiful Beaches of St. John

St. John boasts some of the Caribbean’s most picture perfect beaches. White sands from the coral reefs and beautiful turquoise seas, along with reliably warm tropical weather, make for an idyllic setting. 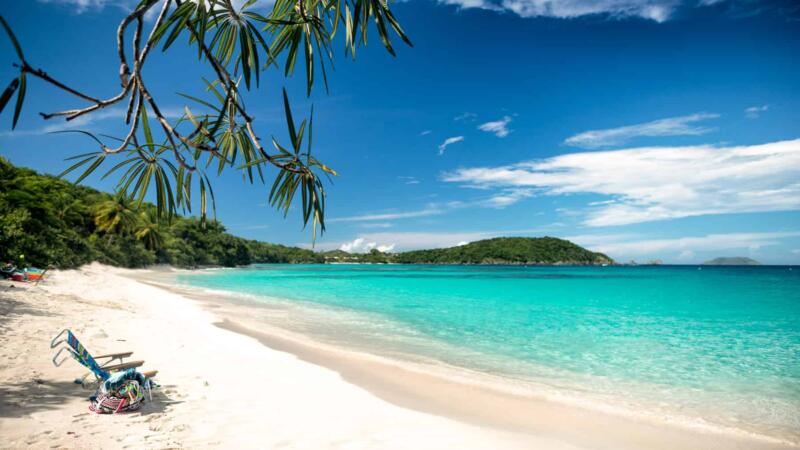 It’s no real wonder that the Virgin Islands were a favorite hangout of pirates, buccaneers, and privateers (ever a fluid distinction). With their numerous nooks and crannies to park a ship to ride out a storm or lay in waiting for ships passing along the many trade routes, they provided the ideal natural environment for an occupation predicated on quick, surprise raids. There’s a good, nearby harbor for any wind and swell direction, and, especially useful to pirates, most of the harbors are sheltered on the land sides by mountains and hills. And the islands had another major attraction to pirate-folk: that elixir of the New World, rum. Invented in the Caribbean as a way to create a profit from the molasses that amounted to essentially industrial waste from sugar production, rum was cheap and easier to store on board than potable water.

For a fun read on the weird and wonderful history of rum in the Caribbean, it’s worth checking out And a Bottle of Rum: A History of the New World in Ten Cocktails by Wayne Curtis.

These nooks and crannies, along with the reefs that are so treacherous to boating then and now, also have a pleasant side-effect for the less piratically inclined—they create some of the world’s most scenic beaches. The area’s coral reefs create white sandy crescent beaches, and the many angles of headlands and rocky outcrops provide protection for pristine beaches. Water temperature (and air temperature, for that matter) doesn’t vary much year round and sits around 79 to 83 degrees Fahrenheit (26 to 28 degrees Celsius). When you visualize an idyllic Caribbean sandy beach framed by beautiful turquoise seas, there’s a good chance it’s going to look quite a lot like one of St. John’s picture-perfect beaches. Not even those other inhabitants of humid, tropical climates—mosquitoes and sand midges—can spoil from the idyllic surroundings.

The view of Trunk Bay, in particular, from a nearby overlook, has become one of the most widely dispersed tropical beach views in the world, even if it’s rarely identified as such. Caneel Bay, with its famous resort, and Hawk’s Nest, with its palm trees and white sands, are precisely what you think of when you think of a Caribbean beach. And thanks to them being in a National Park, they’re not overrun with people and overly commercialized.

The most famous and most visited of St. John’s beaches, it looks like it was created for postcards, and there’s a good chance you’ll recognize the view from the nearby overlook from all manner of island getaway graphics and posters. A small rocky island on the northern end adds protection from ocean swells and in its submerged shadow is where the best of the beach’s snorkeling can be found. With its underwater snorkeling trail—really just some concrete signposts under the water with basic information about the marine life in situ—its lifeguard station, change rooms, and snorkeling gear rental counter, it’s probably one of the easiest to start at, especially with kids. There’s a modest admission charge.

One of the longest beaches, Cinnamon Bay is also one of the most exposed, so if the winds and waves are coming from the north, it’s not always the best option for swimming or snorkeling. But most of the time, Cinnamon Bay is stunning. It’s possible to “camp” at Cinnamon Bay in concrete bunker-like structures, and there’s a newly renovated store onsite. But if you plan on camping there, I’d strongly recommend doing some research in online reviews ahead of time–it’s not, as they say, everyone’s cup of tea, and Maho Bay might be a better bet.

One of the furthest beaches on the northern shore from Caneel Bay, it’s yet another stunning beach. Next to the beach is an eco-resort.

The closest of the beaches to Cruz Bay with road access is also one of the prettiest. A small crescent of white sand lined with waving palm trees, it’s just as you’d picture a Caribbean Beach should be.

Getting to the Beaches

Once you’re on St. John, getting to the beaches is easy. St. John’s taxis—really more like open-back shuttle buses than conventional taxis—run regularly from Cruz Bay along the main road and will pick up passengers anywhere along it. It’s possible to rent a car and drive yourself, but cars can be short supply, are expensive, and you’ll be dealing with roads best left to locals, not to mention driving on the wrong side of the road or the car (on St. John, the vehicles are left-hand drive but one drives on the left-hand side of the road). A more fun option, for those with boating inclinations, is to rent a dinghy or powerboat from Cruz Bay and approach by sea. Because it’s a marine national park, beaching the boats on the sand is heavily frowned upon and most of the beaches are protected by no-boat zones, but several of the beaches offer mooring buoys just offshore, from whence it’s a short swim ashore.

The Beautiful Beaches of St. John