There are good reasons why the Blue Mosque is one of Istanbul’s prime attractions and one of the world’s iconic religious buildings. 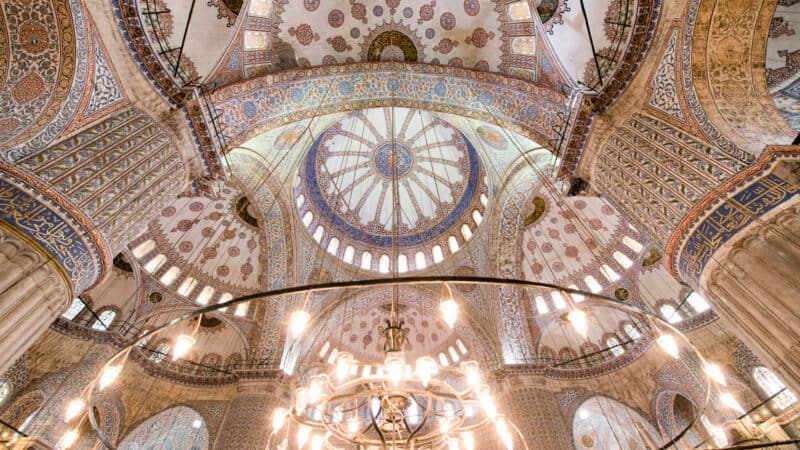 Yes, there’s definitely blue, but the Blue Mosque isn’t as blue as you might expect. It is, however, every bit as beautiful. Impossibly ornate tiles and decorative paintings wrap around almost every surface, especially on the dome ceilings towering high above. And with its six minarets, floodlit at night, it holds its own facing the magnificent Hagia Sophia on the other side of the square, both standing high on the hill overlooking the Bosphorus Strait and Golden Horn.

The architectural genius of the domes creates an open prayer hall with monstrous columns well to the side and out of the way. It is, in every way, splendor.

And blue certainly is a feature that stands out in the Iznik tiles used in the interior. They’re the same school of glazed tiles used at the nearby Topkapi Palace.

The mosque is more properly called the Sultan Ahmed Mosque, after the Ottoman ruler who commissioned its construction between 1609 and 1616. The empire was declining by then, but you’d never know from the beautiful art and architecture of the period.

Unusually and controversially at the time, the Blue Mosque has six minarets. Many at the time interpreted it as an affront to the mosque at Mecca. A compromise was found where extra minarets were added at Mecca to assure the symbolism of that location’s preeminence.

The Blue Mosque is still used as a day-to-day mosque, but it’s also extraordinarily well preserved, and it’s no wonder that it’s one of Istanbul’s prime tourist attractions. It draws 4 to 5 million visitors a year and is widely regarded (with good reason) as one of the world’s iconic religious buildings.

Photos of the Blue Mosque in Istanbul