La Capilla Maria Auxiliadora isn’t the grandest or most famous of Granada’s churches. But it makes a credible claim to be the most beautiful. 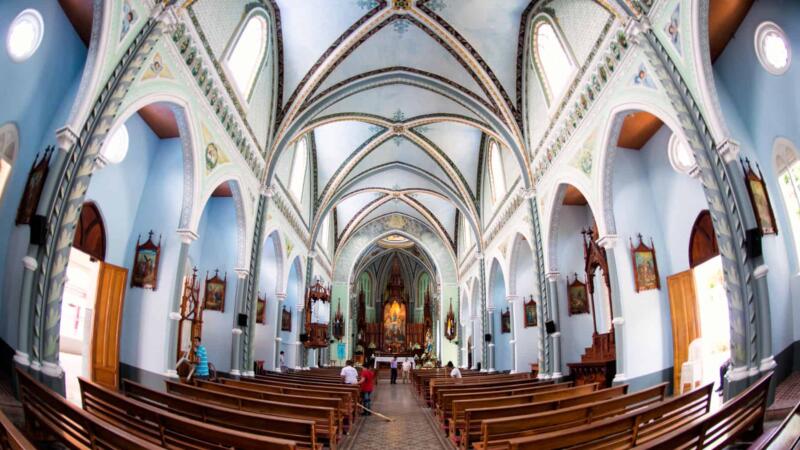 The main feature of its exterior is a tall, narrow facade over the main entrance. Like many Latin American churches where repainting the stucco is part of the routine maintenance, the church’s exterior color has changed over time. At one point, it was a kind of muddy yellow blue trim. Now it’s white with blue trim. And it stands very tall over otherwise low-lying buildings on Calle Real Xalteva, about eight blocks west of Parque Central.

The facade is striking enough, but once you’re inside, it’s much more decorative, with neo-Gothic arches and decorations. Instead of the usual white stucco interior, La Capilla Maria Auxiliadora’s interior is painted in pastel blue and green. Pointed arches overhead converge in the ceiling over the nave, and the floor features an ornate geometric pattern of tiles. There’s an attention to detail and an eye for cohesiveness that you don’t always find in Central American churches.

It all leads to a beautifully colorful altar. To the right stands a statue of Mary and Child. The back of the altar area is decorated with an ornately carved structure that forms the frame of a depiction of the disciples worshipping Mary and the baby Jesus.