Casco Viejo is up-and-coming part of Panama City. Which might sound like an odd thing to say about some of the oldest parts of the oldest city on the Pacific coast of the Americas. 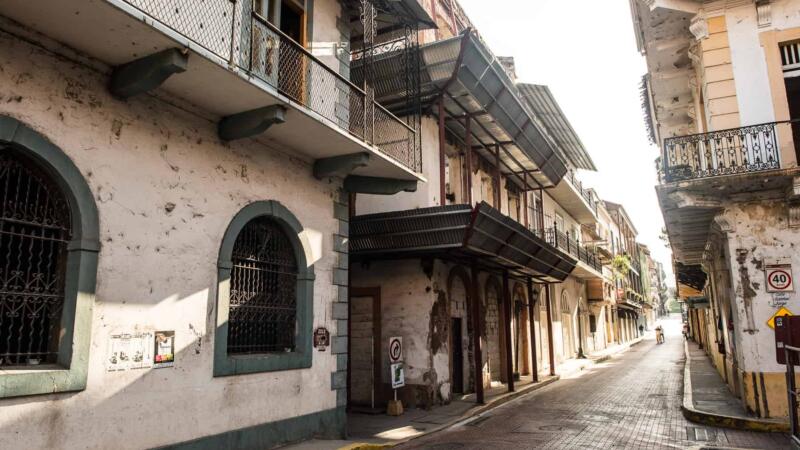 Casco Viejo is an up-and-coming part of Panama City. This might sound like an odd thing to say about some of the oldest parts of the oldest city on the Pacific coast of the Americas. Quite a few of the buildings date back to the late-1600s.

But for a long time, it was neglected. The original settlement was actually a bit further around the bay, but that proved indefensible against raiders, so the town was moved onto a peninsula surrounded by shallow reefs, a position much easier to defend. And for a while, the town thrived, as you can tell from the beautiful churches and buildings. But the rich who once called Casco Viejo home moved to other parts of the city and established new downtowns. Through neglect, large parts of Casco Viejo became dilapidated.

That’s changing, but slowly. The area is now designated as a UNESCO World Heritage Site. And some of its beautiful Spanish colonial architecture has been meticulously restored.

But there’s still a long way to go—the area has been up-and-coming for a long time now. In my totally unscientific count when wandering around the area’s streets, about a third of the buildings seem to be legitimately occupied, many of them with high-end and trendy bars, a few shops, and hotels. About a third appear to be occupied by squatters in barely habitable conditions. And about a third are totally abandoned, many of them hollow shells, often without roofs.

Now that it has been reaping the income from the reclaimed Panama Canal, the country has money that can go towards restoring the area if it wants to. The buildings ooze charm, and with cobblestone streets, historic churches and public squares, the presidential palace, and all on a peninsula jutting out into the Pacific Ocean with sweeping views of the more-modern skyline of the new downtown of Panama City (and, unfortunately, the much less attractive Cinta Costera III highway just offshore). In short, Casco Viejo is brimming with possibility. In ten years it could be quite something to behold. But it also wouldn’t surprise me if in ten years nothing much has changed, and we might still be saying then that it’s still up and coming.

For now, it’s an area in transition. I’m a fan, but if you go you should expect the odd mix of abandoned buildings that hint of both potential splendor but also something of a ghost town feel. A fancy new nightclub or hotel will probably share a wall with an abandoned shell of a building. On weekends, the area’s new rooftop bars are the places to be, and traffic pours in and clogs the roads.

Some hotels, like the American Trade Hotel right in the heart of it, are looking to recapture the old-world Havana-esque charms and have done a remarkable job of it. Others are going to need far more than a new coat of paint.