BRUSSELS, Belgium — Most churches count their blessings to have one patron saint. This one has two. 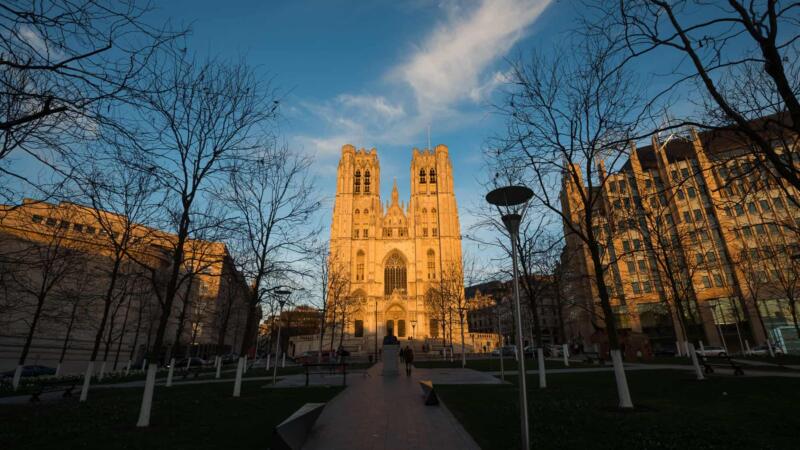 Most churches count their blessings to have one patron saint. This one has two. And, as it happens, they’re both also the co-patron saints of Brussels.

It wasn’t always that way. There’s been a church on this spot since at least the 11th century–perhaps even two centuries before that. You can now tour part of the original foundations in an exposed archaeological site underneath the main floor in the cathedral’s crypt.

But it was originally devoted to the Archangel Michael. Though he’s not technically a saint–he’s an angel–he’s considered the patron saint of Brussels, and you can see images of him slaying dragons everywhere from city light posts to standing on the very top of the spire of the Town Hall on Grand Place. He’s usually depicted killing the dragon, symbolic in times past of protection of the city. (You can also see him in Bruges and other Belgian towns.)

Gudula’s claim to sainthood seems based on her piety. She’s often represented with a candle or lantern, supposedly representative of the light she carried in her pre-dawn walks to the church, two miles from her home. When a demon extinguished the light, Gudula appealed to God to rekindle it. He granted her request.

But Gudula clearly came from pretty remarkable stock. Her mother, Amalberga of Maubeuge, is also venerated as a saint, as are four of her siblings. (This predated the “modern” process of papal canonization. At that time, someone could be celebrated as a saint by “spontaneous local attribution.” Interestingly, even early saints such as Saint Peter and Saint Paul were never formally canonized–they were instead proclaimed saints by early Christians.)

But in the 11th century, the relics of Saint Gudula were moved here. But they’re long gone now. They were plundered when the church was pillaged in 1579.

Since 1962, when the church was granted cathedral status. It’s also the national church of Belgium, making it the scene of royal weddings and coronations. And, as you can see from the photos, it bears more than a passing resemblance to Notre Dame in Paris.

Photos of the Cathedral of Saints Michael & Gudula