I don’t usually have issues with claustrophobia, but this isn’t fun anymore. How people could live down here is beyond me. 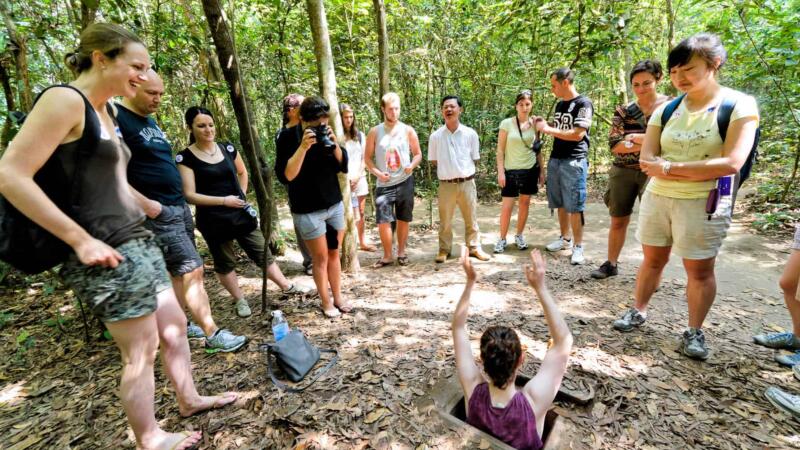 “No one has ever demonstrated more ability to hide his installations than the Viet Cong; they were human moles.”
–General William Westmoreland1

I don’t usually have issues with claustrophobia, but this isn’t fun anymore. I find it amazing that people could live down here, spending all day below ground in what were not only hot and wet and stifling, but were infested with rats and mosquitoes and provided a near ideal environment for incubating disease. And that was the least of their worries. They also had the might of the American military trying to kill them, turning this area into the most bombed, most gassed, most shelled, and most defoliated piece of real estate in history.

I’m in one very short section of tunnel of what was a network running hundreds of miles in southwest Vietnam on the outskirts of Ho Chi Minh City. I’m in the very top level of tunnels, but there are several levels below this, now inaccessible. Below were small rooms to serve as living, meeting, and storage areas. Since it wasn’t safe to be on the surface during the day–or indeed, during many nights–residents spent most of their time below ground.

The first sections were dug by the Vietminh in the struggle against the French colonial government. When the Americans became involved, it became a Vietcong stronghold. The tunnels were extended. Command and control centers were created. Supplies and communications were brought in at night by land or by river. For the Americans, it was disturbingly close to Saigon, deep in South Vietnam, and infuriatingly difficult to destroy. For the Vietcong, the Iron Triangle, as it became known, framed by two rivers, was within striking distance of the South Vietnamese capital.

There are examples of stunning ingenuity. Digging tunnels means moving the dirt from below ground to above ground. But new piles of freshly dug earth would be a visual tipoff to American spotter planes and scouts. So the Vietcong would put the earth only in either new bomb craters or cart it through tunnels that came out at the river, where the water would wash away the evidence. To stop the tunnels from becoming flooded in the rainy season, special drain tunnels were built leading to the river. And so that a pursuer would never have a clear shot, the tunnels were zig-zagged.

And there are also many examples of ingenuity with a more gruesome flair. Up to 30 percent of some types of bombs didn’t explode, which is why the problem of unexploded ordnance, or UXO, remains a modern-day blight on vast tracts of Southeast Asia. But the Vietcong saw those unexploded munitions as opportunities. They would collect the unexploded bombs, cut them open by hand in what must count as one of the world’s riskiest jobs, drain the explosive powder and re-use it in their own booby traps. Bombs dropped by American B-52s, then, were turned into weapons used against the Americans and their allies.

And there was a wide catalog of booby traps, positively medieval in their grisly efficiency. Relatively few were designed to kill outright–most were designed to incapacitate and maim. There were many variations on hidden trapdoors hiding metal spikes (often carved from the casings of unexploded ordnance) that would grab tighter the harder one tried to pull out or that would skewer the leg. It’s chilling to think what it must have been like for a person caught in one of these bear traps. For the Vietcong, though, these had an advantage over an instant kill of an explosive mine–it meant that they could plunder the trapped soldier’s weapons, supplies, and equipment for their own use.

The Vietnamese government has opened part of the Cu Chi Tunnels to tourism. It has the distinct flavor of a downmarket theme park. The forest is coming back, covering what was, after 1966, when the B-52s were let loose on the area, a muddy moonscape devoid or any visible life. Signs now helpfully point out bomb craters left by American bombs. There are plastic dummies dressed in military fatigues, looking more western than Vietnamese and wearing uniforms that the Vietcong didn’t have. You can climb over a captured tank, posing for a photo. You can pull the trigger on some firearm exotica, including an AK-47 or M60 machine gun, blasting through a wad of cash in a few seconds (rounds are a dollar or two each, depending on the type of weapon you choose). You can pose for a photo next to a bust of Uncle Ho himself.

And you can walk in one of the original tunnels. Or, more accurately, you can waddle. To the extent I’d thought about it, I imagined that people had crawled through these. They’re tiny corridors, after all, built specifically for slight Vietnamese frames made lean by wartime conditions rather than the taller, wider shapes of Westerners. That made it difficult for American or Australian soldiers (or French, before them) to follow them underground, especially with their weapons and gear. And it made sense for Vietnamese body, with a lifetime of training to sit comfortably on its haunches. But my body has been trained by western seating and doesn’t fold up that way.

It’s a tight fit, and not being able to see ahead or behind, and there being no prospect of standing up anywhere, is more than a little disconcerting. I decide, about 60 feet in, that I’ve got the idea and gladly take the exit up to the surface. How people managed to live, work, and fight down there for days, weeks, or months at a time is something I’m having trouble wrapping my head around.

Photos of the Cu Chi Tunnels

## What To Know Before You Go

There are a couple of tunnel complexes open to the public. The most-visited, at Cu Chi, is about an hour outside Ho Chi Minh City. The easiest way to get there is by a tourist bus that will pick you up at your hotel. A more scenic option is to go by boat; the same tour companies can often arrange both.