CHICHEN ITZA, Mexico – Chichen Itza is one of the most famous, most impressive, and most visited of the Mayan ruins sites on Mexico’s Yucatan Peninsula. 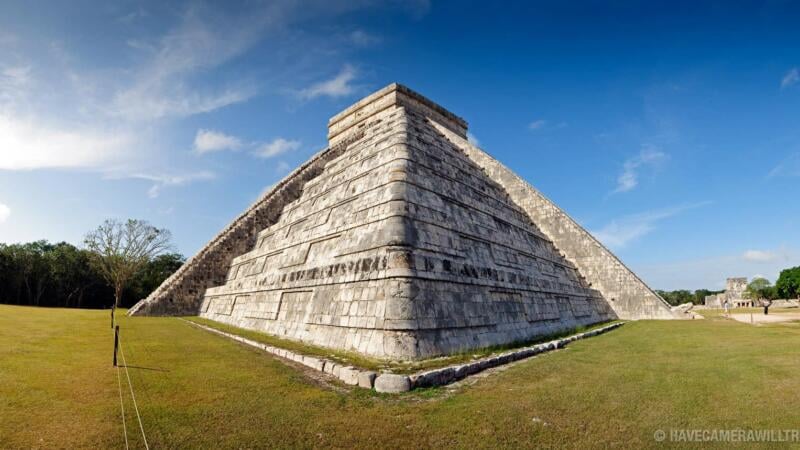 The symbol of the feathered serpent–the body of the rattlesnake, covered with the plumage of the quetzal bird–was to this civilization what the Cross was to the Christian and the Crescrent to the Saracen. Under this symbol the culture her Kuk-ul-can (Feathered Serpent) of Yucatan, Quetzacoatl of the Aztecs and earlier people, was first reverenced, then deified and worshipped.

It’s hard not to be impressed by the imposing structures of Chichen Itza, one of the most famous and most visited of the sites of Mayan civilization ruins on Mexico’s Yucatan Peninsula. As impressive as Europe’s ancient ruins are, they have a fundamentally different feel than those in Central America. There’s a quiet dignity to what physically remains of the Mayan civilization.

Undoubtedly, that has much to do with their location. Whereas many of the European ruins are often in the middle of modern populated areas, making it easy to see the modern incarnations of those ancient times, (Pompeii and Herculaneum notwithstanding) many of the Mayan sites have been truly deserted for centuries and are surrounded by miles of forest. Modern archaeological efforts have tried to reclaim these ancient cities from the encroachment of tropical forest, but the built structures are at such striking odds with the thick forest that surrounds them that one can’t help ask “How on earth did they build this here?” quickly followed by “Where’d everybody go?” It all adds to the sense of mystery that you can’t escape when visiting what’s left.

Located in the center of Mexico’s Yucatan Peninsula, Chichen Itza is a large Maya civilization complex centered around the distinctive pyramid known as El Castillo (Temple of Kukulkan) pyramid. The complex also features the Great Ball Court, the most impressive of several such sporting arenas found at other Mayan sites, basically a long court with hoops built up on the walls and surrounded by spectator galleries. Precisely how they played the ball game is now a mystery, and the various reenactments you’ll see at some of the tourist sites are basically just guesses.

Unlike some other, smaller Mayan sites not far away like Ek’Balam, Chichen Itza has been converted into a quintessentially tourist-friendly site and makes for a great stop during a vacation in Mexico. The first giveaway is the parking lot with a dedicated tour bus section. Being only a little over 2 hours from Cancun (or about 45 minutes from Valladolid, if you’re looking for a more pleasant base), hordes of tourists stream in daily.

It’s a huge area and can accommodate a lot of people and has ample modern amenities, but arriving at opening time before the tour buses arrive makes for a much more pleasant and rewarding visit. It also means that you’ll probably not be inclined to hang around until evening for the nightly laser and light show that’s included with the price of admission, but somehow that doesn’t seem to me to be much of a sacrifice.

Chichen Itza is a UNESCO World Heritage site and is listed among the New Seven Wonders of the World.

It’s a large, sprawling area with many isolated areas. If going early or late in the day, it’s a good idea to go with a group or a guide.