Guatemalans sure love their fireworks. And Chichicastenango, in the Guatemalan highlands, is not a place that considers fireworks only night-time entertainment. 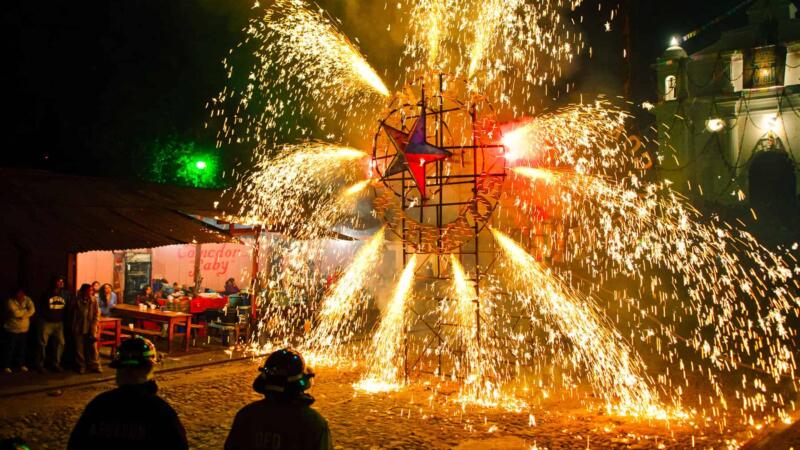 Periodically, rockets streaked up from the busy street below, carrying the prayers of worshippers skyward. The Indians often hold these homemade rockets in their hands until they literally tear themselves from their fingers and soar into the blue, trailing six-foot tails of cane, to end in loud pops and puffs of black-powder smoke.

Guatemalans sure love their fireworks. It’s something I found in several places I visited, both in smaller towns and in the crowded cities. But it was most striking in Chichicastenango in the Guatemalan highlands. The sound of sporadic fireworks in the streets around my hotel lulled me to sleep late into the night and woke me again just after sunrise. And they continued through the next day–this was not a place that considered fireworks night-time-only entertainment.

Chichicastenango, or Chichi, is famous for its Sunday markets (and, to a lesser extent, the somewhat smaller Thursday ones). They’re said to be the biggest in Central America, and people come from villages from many miles around, many of them walking, to sell their wares. You won’t have a problem finding the expected tourist souvenirs, but you can also buy pigs, turkeys, clothes, fruits and vegetables, and just about anything else a local might need to get through the week.

I’ll be doing a separate post on the market in coming weeks, but for now, I wanted to share some of these shots from the fireworks of a street festival I stumbled into the night before the market. The occasion was Our Lady of Guadalupe Day, and it was one of a string of banquets, or “treats,” in Chichicastenango leading up the main Fiesta de Santo Tomás just before Christmas. Saint Thomas is the town’s patron saint–its formal name is Santo Tomás Chichicastenango, a name given to it by the Spanish conquistadors–and the main church is the Iglesia de Santo Tomás, so they make rather a big deal about their saint’s fiesta.

All through the Saturday afternoon people had been streaming into town and setting up their stalls and laying out their makeshift beds on the stall’s floors. And after having their dinner at one of the many market eateries (comedores) that had been set up to feed the crowds, the bustling mood suddenly shifted from work to play.

I’d seen the large metal swing frame earlier in the afternoon in the main square in front of the Church of Santo Thomas, but I hadn’t really worked out what it was for. But during the evening, workers had rigged it with fireworks, and it had begun to take shape. It was about 20 feet high with two stands with large circles at either end. Between those stands was a big swing; some kind of cartoonish character sat on it.

But there was something odd about it. This wasn’t in the middle of some field somewhere. It was in the middle of a small and very crowded square. People were all around, and the nearest stalls were only about 12 feet away. Were they really going to set this thing alight?

Why yes, yes they were. But first, there was a marimba band (and a good one at that! Orquesta Marimba Maria Guadalupe, I believe they were called), dancing, piñatas attacked by swarms of kids, and the launching of paper sky lanterns. Out came boxes of fireworks, set off throughout the evening apparently whenever the fancy struck or there wasn’t something else going on. And then it was time for the main event.

I’ve seen some pretty extraordinary fireworks displays, from the massive New Year’s Eve extravaganza on Sydney Harbour, to 4th of July on Washington DC’s National Mall, to Guy Fawkes Night in the English countryside, to F-111 dump and burns, and a lot in between. But this was something quite different again.

It was, for lack of a better word, the most intimate fireworks display I’ve seen. And that’s not normally a word you’d use with fireworks. This wasn’t something the audience watched from a safe, detached distance. Hundreds of people were crowded around the fireworks stand, with several more sitting on the steps of the church. And when it got going, people all around were being showered with burning sparks, not just the falling, cooled ash that’s normal at most fireworks displays. At one point, when things were hotting up–literally and figuratively–and screaming fire was shooting in every direction, I actually had to put the camera up to my face because I figured that it was safer than being hit in the eye. We were all getting hit–how someone didn’t get seriously hurt or the stalls go up in flames, I have no idea. To be sure, there were three firemen on duty, but they seemed to be there solely in case something went wrong. No-one was telling people to get back. In fact, there was one man who was dancing barefoot through the fireworks and no-one seemed particularly concerned (you can see him in one of the shots above). Perhaps he was a Maya shaman, but he was definitely on a different plane of consciousness from everyone else. Sure, we could have all moved further away, but then where’s the fun in that? (For a different vantage point and to get a sense of the noise, check out this short video snippet posted by someone else who was there.)

And this wasn’t some computer-directed show synchronized to the 1812 Overture. It was a case of light ‘er up and stand back. For the next 10 minutes or so, the fireworks on the stand went through a progression of phases, getting more and more frenetic. The wheels either end spun in wheels of fire, the figure on the swing started swinging higher and higher, and the screaming fireworks got louder and louder.

When it finally fizzled out, the band fired up again for another round of dancing and partying.