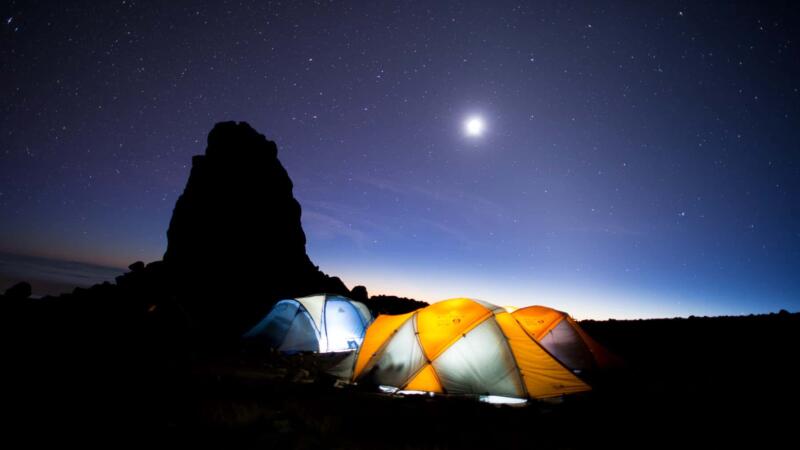 We awoke to frost covering our tents. And because we’re on the Western side of the mountain and in the shade, the morning sun takes a while to warm things up.

Today we gained about 1,500 feet today in a fairly straightforward hike. On the way, we crossed from the heath zone (also known as the moorland) to the alpine desert.

That meant a pretty dramatic change in scenery. There are no more plants or trees or any other signs of life. (Although apparently it’s not unheard of for solo buffalo or other animals to wander all the way up here to get the mineral nutrients in the alkaline soil.)

Soon we’re walking through a harsh, rocky, grey landscape that could pass for the surface of Mars. Everything around us has, at some point in the distance past, been spewed out of the volcano.

That includes Lava Tower itself, a large column of rock jutting up conspicuously on the edge of a small level area that is used as Lava Tower Camp.

If you’re game and not too exhausted, you can climb to the top of Lava Tower. I decided resting and getting warm was a better way to spend my time. But from the top, you get not only a good view but also a little help with acclimatization–up here, any little altitude gain, even temporary, makes a difference.

Enroute, we also got our first view of the summit of Mt. Meru off to the right–about 70 miles way–its summit poking through the thick layer of clouds below us. We’ll have a good view of it for the next few days until we go over the summit and start heading down the other side of the mountain.

It was cold and windy when we arrived, but it started to die down around 8pm, leaving it just cold.

But the cold doesn’t take away from the spectacular view. We have a clear shot at Mt Meru poking through the clouds. The eerily clear skies with no light pollution to speak of mean that the night sky is dazzling. The Milky Way is easily visible in a thick band dividing the sky. If it wasn’t so cold and we weren’t so exhausted, we could sit out here for hours just stargazing.