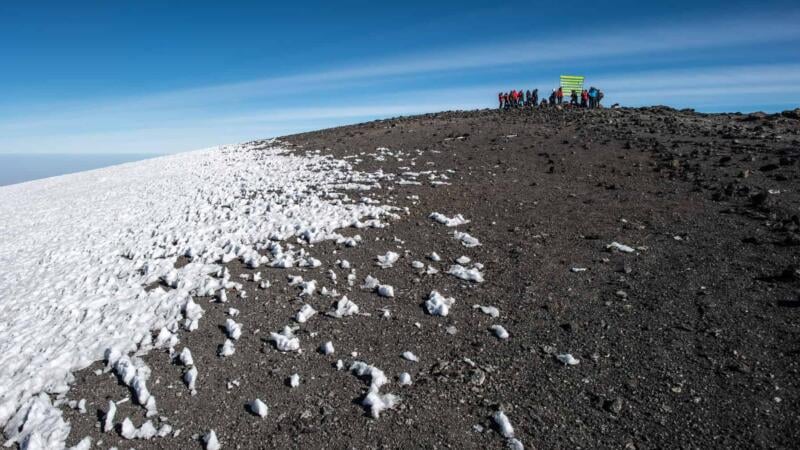 It’s summit day. We’ll reach 19,341 feet, by far the highest any of us has been without being in a plane.

It was cold last night. Our water bottles froze solid inside the tents. And it’s cold as we head off before sunrise.

Compared to yesterday’s climb up the Western Breach, the uphill part of today’s climb is much easier. But there’s still a steep section of scree and rocks to go before we reach Uhuru Summit.

We start early–it’s going to be a long day. And by getting to the summit early, we hope to beat the rush. Unbelievably, even up here, there are traffic jams of climbers getting their photos taken at the sign marking the highest point. We’re the only ones this morning making the ascent from Crater Camp–everyone else is coming from the other direction, taking the Marangu Route, having started their day’s climb around midnight.

The landscape up here is harsh but beautiful. There are no clouds, and not a lot of atmosphere above us to soften the sunlight. There are no plants or trees–just sharp rock and scree covered by snow and thick ice glaciers. But the air is crystal clear–who knows how many miles away the horizon is, but it’s a long way.

There’s some snow and quite a lot of ice, but apparently, it’s much less than there used to be. Thanks to climate change, melting is accelerating. Estimates vary on how long it will be before the ice is gone, but nearly all of them measure it in decades, not centuries.

Going down, we pass a lot of people heading up. We pass a couple of people using oxygen tanks. Some climbers look strong; more look like they’re struggling.

We don’t envy them going up that that route. It’s steep and it’s covered in a thick layer of loose scree. Going down, using the natural slide of the scree works to our advantage–a bit like walking down a steep hill with a thick blanket of snow. But walking up, each time your foot slides down a little bit you have to exert that much more energy to make any progress.

We have a few hours heading down through this steep scree. It puts a lot of strain on our knees, and muscles we haven’t really used for almost a week suddenly come into play. As we move out of the scree, the path remains steep and rocky, but at least doesn’t move quite so much underfoot.

We pass through an overcrowded Millenium Camp, with tents perched precariously on top of each other on any available space, and stop for lunch a little below the camp. And then we have several more hours heading downhill. By the time we reach Mweka Camp, just before dark, we’ve passed completely through the heath zone again and are in the upper reaches of the forest zone.