BAGAN, Myanmar (Burma) – Its gleaming gold stupa certainly stands out against the surrounding countryside. Completed in 1198, it features an unusual 5-sided design. 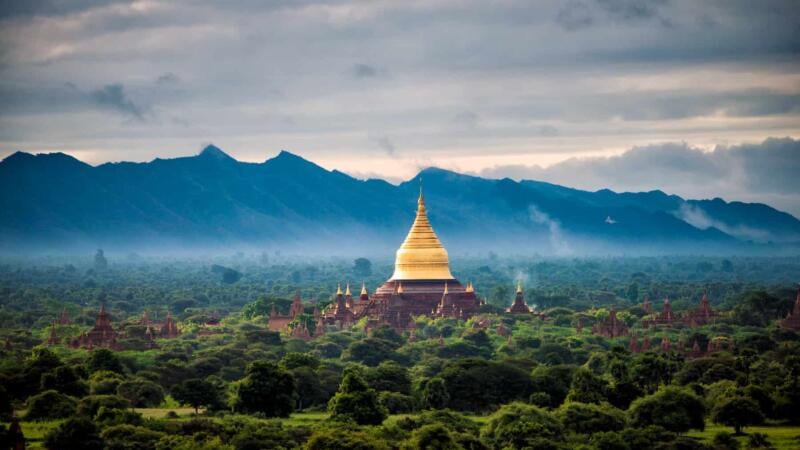 Since I was there, the situation in Myanmar/Burma has changed a lot. In February 2021, a military coup sparked widespread civil unrest and armed conflict.

The U.S. State Department currently advises: "Do not travel to Burma due to civil unrest and armed conflict." You can find their full travel advisory and security alerts here. And you can find the British Foreign Office's travel advice for Myanmar / Burma here.

The gold stupa of the Dhammayazika Pagoda certainly stands out, especially at sunrise and sunset. But it wasn’t always this opulent. Until the 1990s when it was restored, it was basically deserted.

The renovations included a gleaming gold finish for the massive stupa. They also destroyed some of the original stucco work, very little of which now survives.

Dhammayazika Pagoda lies in the eastern part of the Bagan plain, and it was completed in 1198–despite its massive size, it took only two years to build and consumed an estimated 6 million bricks

Unusually, its footprint is 5-sided, with each side representing one of the five principal Buddhas: the historical Gautama Buddha, his three predecessors, and the Buddha of the Future, Metteyya.1)

One of the highlights of Dhammayazika Pagoda is the collection of several hundred plaques telling the jataka stories which tell of the previous lives of the Buddha. Based on the number of niches, there were probably 601 tiles originally, but only 371 remain today.

With its glistening gold stupa, Dhammayazika Pagoda stands out and is pretty easy to find in the eastern part fo the Bagan plain.

As with many Burmese names, it has been transliterated several ways. You’ll also see it written as Dhamma-ya-ka Zedi and Dhamma-Yazika.