GRANADA, Nicaragua — Historic and pretty Granada is on Lake Nicaragua (Lago Nicaragua), but the lakefront isn’t all it could be. 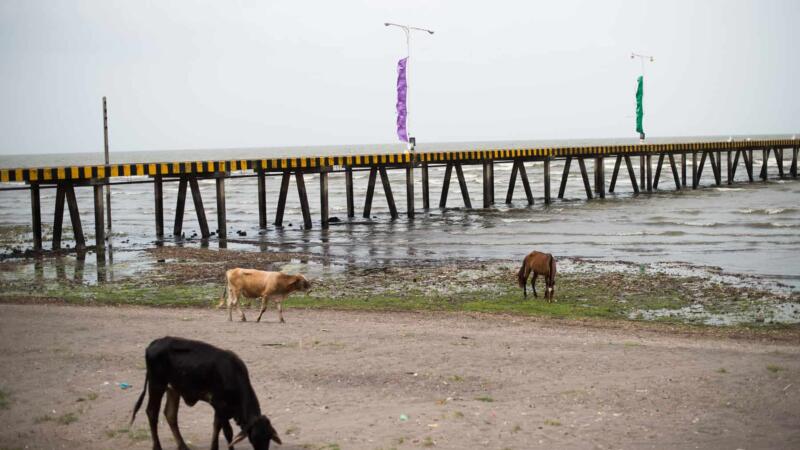 It no doubt seemed like a good idea at the time. Take about 2KM of parkland along the lakefront and turn it into a public park, with a long beach, playgrounds and park benches galore, and numerous bars and restaurants.

It’s close enough to be an easy walk from Parque Central, but it’s far enough removed to be an escape from everyday lives downtown. Build it and they will come.

When it opened, it was no doubt shiny and exciting. But based on how it is now, it appears that they may not have come, at least not in the kind of numbers that were needed to sustain it. Granada’s population is a bit over 100,000 or so. Even adding swollen tourist numbers, it would need heavy, regular traffic to inject the kind of funding that upkeep of such a large area requires.

It’s still a park by the lake, but when I visited it recently it had a sad and rundown feel to it.

You enter through a gateway of a mock Spanish fort. A sign indicates the entry fees, but no one is on hand to collect them–there’s only a sleepy guard napping on a chair. A few kids played in the water of the lake, but rows of playgrounds sit mostly empty. The most-used parts are the many brightly painted concrete park benches facing the lake under the shade of the mango and ficus trees. Many of what were once large bars, youth discos, and restaurants are now concrete shells still sporting crumbling signs like Heaven by the Lake. A few bars remain open where you can grab a cold beer, but they’re not especially inviting dining destinations by themselves.

Even the waterfront itself has a distinctly neglected feel to it. From a distance, rows of tall palm trees look promising. But as you get closer, piles of trash are washed up on the shore, and cows and horses are led to graze on the patches of grass. The beach is gravelly and course. Overall, it isn’t what you’d call an idyllic tropical beach. It’s a shame, because it could be so much more.

Photos of the Lake Nicaragua Waterfront in Granada