Even Uncle Ho needs a holiday. Even while he’s away on his annual autumn sojourn in Moscow, his mausoleum in downtown Hanoi still gets the royal treatment. 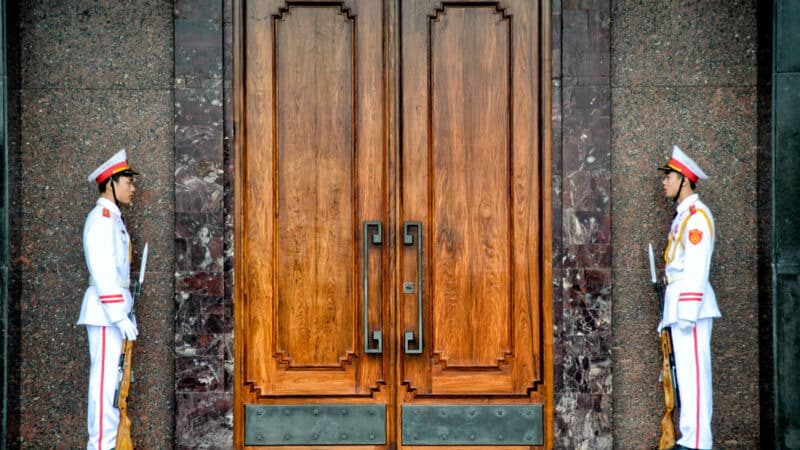 Even Uncle Ho needs a holiday. Mind you, and as much as I like the place, I can think of more picturesque places than Moscow as that city heads into winter. Each year, in October and November, Ho Chi Minh, not exactly under his own steam, ventures to Moscow for some TLC, getting spruced up by the Russian team responsible for preserving Vladimir Lenin’s youthful glow.

When Lenin died in 1924, it started a trend in Soviet-bloc and some Communist countries for embalming their great leaders and putting them on public display. It was, of course, so that grateful and grieving members of public could pay their respects. Lenin, Stalin, Ho Chi Minh, Kim Il-sung, and Mao Zedong all received that treatment–although in the anti-Stalin wave in the mid-1950s, Stalin was removed from display and buried next to the Kremlin wall just outside Lenin’s Mausoleum in Red Square. Recently departed North Korean leader Kim Jong-il will apparently be joining them, with Pyongyang announcing plans to embalm his body in a mausoleum complex yet to be constructed in the North Korean capital.1

Ho famously decreed that he should receive no special post-mortem tributes, that he should be cremated and that his ashes should be scattered in the Vietnamese countryside so that he could fertilize the agricultural land. The Vietnamese government respectfully disagreed. Four years after his death, they began construction of this massive marble crypt to house Ho’s embalmed body for public display. It stands on the spot where Ho had read the Vietnamese Declaration of Independence on September 2, 1945, and when it opened in 1975, it became hallowed ground.

Apparently oblivious to the ceremonial similarities they share with the honor guards of royal households, goose-stepping Vietnamese soldiers in white dress uniforms stand watch over the entrance, switching out every hour–even when Ho’s away for his annual holiday. Each guard’s personal history has been carefully vetted to ensure that there’s no past blemish on their record (or that of their family’s) that might disqualify them from the special honor of standing guard here. Tourists are welcome to observe the ceremony, but whatever you do, don’t walk on the grass or cross the yellow line. And absolutely, positively don’t try to take photos inside.