The Citadel in the Imperial City of Hue

HUE, Vietnam — Inside the Citadel walls was once lavish and opulent, with ornate gardens and intricate pagodas. But the Vietnam War was not kind to the Imperial City. Large parts of it are now nothing more than rubble. 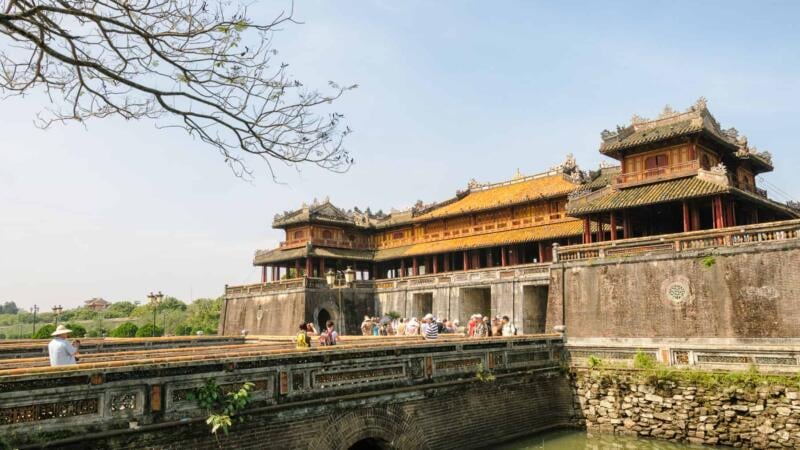 The thick stone walls of Hue’s Citadel are certainly solid, towering above a moat fed by the Perfume River. For nearly a century and a half, from 1802 to 1945, those walls protected the royal capital of Vietnam’s Nguyen dynasty. Within the Citadel, the Purple Forbidden City was an inner sanctum reserved exclusively for the royal family. It provided multiple layers of defenses for a supposedly impregnable fortress protecting the royal family from potential invaders from out beyond the walls.

Inside the Citadel walls was once lavish and opulent, with ornate gardens and intricate pagodas. But the Vietnam War was not kind to the Imperial City. Large parts of it are now nothing more than rubble.

Hue’s position was strategic. Just to the north was the DMZ, the demilitarized zone that served as the dividing line between North and South Vietnam. Half a dozen miles to the northeast is the South China Sea. American warplanes and helicopters launched strikes against North Vietnam from Hue’s airbase. And the U.S. Navy controlled the waters of the South China Sea, maintaining the supply lines so crucial to an army at war.

For most of the war, Hue was held by the South and their American allies. But it was also one of the few strongholds in South Vietnam held for any length of time by the North. In 1968, as a major part of the Tet Offensive, the impressive stone walls were breached as a force of about 10,000 North Vietnamese soldiers descended on Hue to capture much of the city. Their occupation didn’t last long–they were pushed out by U.S. Marines and South Vietnamese forces in about a month. But they didn’t go quietly. The intense house-to-house fighting and escalating shelling and bombing destroyed much of the city.

About 160 buildings once stood inside the Citadel’s walls. Less than a dozen survived the Battle of Hue.

The flag of modern, united, communist Vietnam is visible for miles around up and down the Perfume River as it now flies on the massive tower on the royal Citadel, a building standing like a drab, stone wedding cake.

To its credit–albeit in part chasing tourist dollars–the Vietnamese government is willing to look beyond the Imperial City’s imperial past and is funding some restoration. Some sections that are beyond repair are getting shiny new structures. Other sections are getting repair work done. But unfortunately, there’s only so much that can be done with rubble.

What’s left of the Citadel is impressive, but it’s clearly but a shadow of what it once was.

Things to Know Before You Go

How long does it take to visit Hue’s Citadel? It’s quite a sprawling complex, so allow some time and expect some walking. Unless you specifically arrange a guided tour, you can wander around at your own pace and take as long as you like.

How do you get to the Citadel in Hue? Once you’re in Hue, you can’t miss it. That massive flag you see is right there. It’s on the banks of the Perfume River, so just follow the river around and walk in.

What to wear in Hue’s Citadel? While I’m not aware of any official dress requirements, respectful, climate-appropriate clothing will fit in well. Much of the site is outdoors, so hats or other cover from the sun is a good idea. If you go inside the religious buildings and pagodas you’ll be expected to remove your shoes.

The Citadel in the Imperial City of Hue