ISTANBUL, Turkey (Türkiye) — If I was picking a name for this museum, I wouldn’t use the word “naval.” Istanbul Maritime History Museum would be a better fit. Or better yet: Royal Water Taxi Museum. But what impressive water taxis they are! 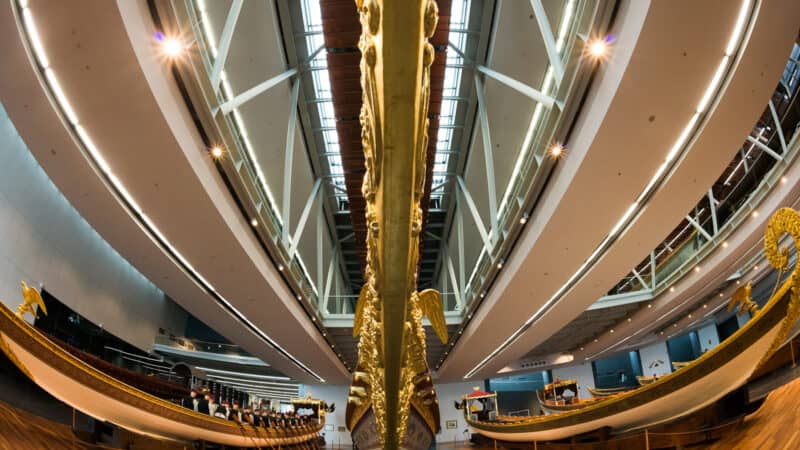 If I was picking a name for this museum, I wouldn’t use the word “naval.” Istanbul Maritime History Museum would be a better fit. Or better yet: Royal Water Taxi Museum. But what impressive water taxis they are!

While there are exhibits and artifacts related to the history of the Turkish Navy, the star attractions of the museum are 14 imperial caiques (royal barges), most of which date to the 19th century.

The caiques—made of wood and long, thin, and powered by a contingent of rowers—are laid out side by side. They take up the two main floors of the museum. Scattered in amongst them is a small number of other assorted rowing boats such as some used by Ataturk.

Imperial caiques were used by the Sultan and his family for day trips in coastal waters. Designed as much to symbolize power as for their function. Some have a kiosk on the stern, inevitably ornately decorated. Some don’t. Many of them have some kind of bird on the bow, representing the empire. Those decorated with coat-of-arms, crescents, and flags were those used by the Sultan. Those decorated with images of leaves, flowers, and fruits were those used by the Harem.

Ranging from the massive wooden imperial caiques to much smaller but no less impressive for the intricacy of their wood inlay and painted decorations, many of the barges are coated in so much gold that it’s a wonder they stayed afloat.

The museum was established in 1897 but has changed location several times since. Since 2013 it has reopened in an impressive new space overlooking the Bosphorus, with walls lined with copper panels and two-story floor-to-ceiling windows looking out over the water.

Downstairs, in a basement area, is a collection of ornate figureheads and ship decorations. Unlike the tradition in most other European maritime forces of the time that often used figureheads of mermaids or women, Turkish figureheads typically featured strong, scary, or speedy animals like lions or eagles.

And a couple of smaller rooms off to the side are some ship models, a few exhibits about maritime history, and a section of the famous chain used to block the Golden Horn during Mehmet the Conqueror’s efforts to invade Constantinople in the mid-15th century (sections of the chain are also on display at several other museums in the city).