The Chapel at Kronborg Castle isn’t especially large, and it’s not ornate by the standards of other European churches, but it has its charms. 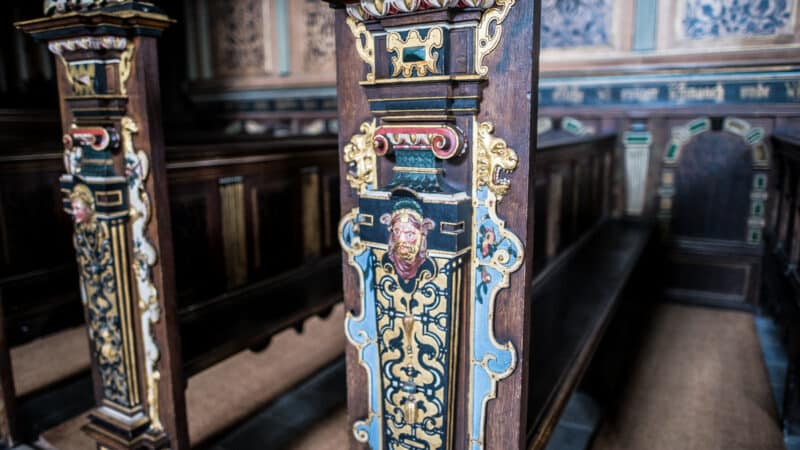 The Chapel at Kronborg Castle isn’t especially large, and it’s not ornate by the standards of other European churches, but it has its charms. It’s also one of the oldest parts of the castle. It dates back to 1582 and survived a major fire in 1629 that claimed much of the rest of the castle.

Kronborg Castle, a former royal palace on a peninsular jutting out into a narrow channel of the Sound between Denmark and Sweden. The castle is in the town of Helsingør, about half an hour north of Copenhagen.

The Chapel’s floor is covered with black and white checkered tiles, and above is a whitewashed arched ceiling. The altar is nice but not overly ornate, and an impressive pipe organ sits at the other end. But it was the sitting area that particularly struck me. From a distance, the pews look like any other wooden pews. But as you get close, you see that each is topped with a painted headpiece. Each is unique, and some are quite striking. They depict various aspects of the royal coat of arms and religious figures and symbols.

The most ornate decorations are around a set of three windows in the upper-floor gallery on the left as you’re looking towards the altar. This is the king’s throne area, built on the orders of King Christian IV.

In the 18th century, the castle was taken over as a military garrison and the chapel was cleared of its furniture and used by the soldiers for fencing and gymnastics training as well as ammunition storage.

In the 1840s, it was returned to its original religious purpose. It has since been used for royal weddings, and from time to time members of the local parish of St. Marie Church hold their own weddings there. If you’re there on the first Sunday of each month or for church festivals you might catch the church bells peeling.


How to Get to Kronborg Castle