Known as Hamlet’s Castle because Shakespeare’s play was set there, Kronborg Castle is a 16th-century castle on a strategic peninsula on the Sound, just north of Copenhagen. 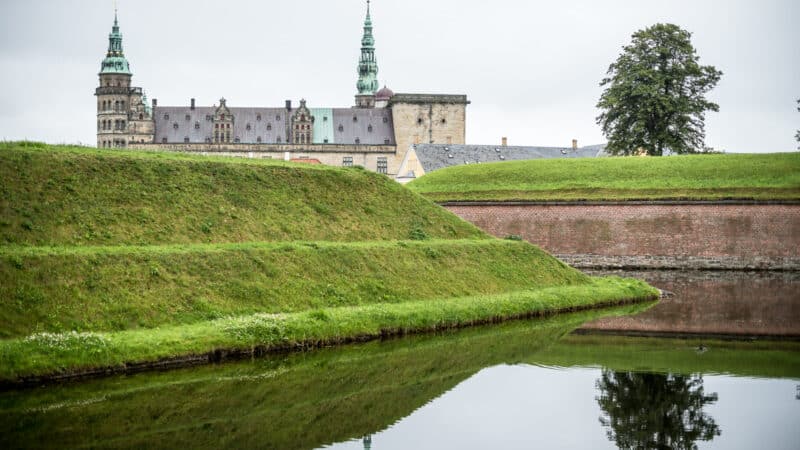 It’s known as Hamlet’s castle because Shakespeare set his play at the castle in Elsinore, the Anglicized version of the town’s Danish name, Helsingør.

Kronborg Castle sits on a peninsula of the Sound that leads down to the Baltic. It’s on a narrow point between Denmark and Sweden. You can easily see the Swedish coast on the other side. Although there were earlier fortifications on this spot—it’s a strategic spot, after all—the current castle dates back to the late-16th century.

Inside is dark and airy. It’s not cold, drafty, and uninviting in the way of Norman stone castles (but then, it’s also a lot newer). And it’s not over-the-top like Baroque castles with their impossibly ornate and whimsical flourishes. Rather, Kronborg is fittingly Scandinavian, with wooden floors, clean lines, and plenty of open space. When you visit today, there are some pieces of old furniture and decoration there to give at least some sense of how it might have looked in the day, but many of the furnishings are either reproductions or have been acquired much later than the 16th century.

On at least two sides of the castle there’s a view out over the channel between Denmark and Sweden, the narrow entrance to the Sound that provides water access down to the Baltic. It’s no accident that the view over the channel is on the same side as Frederick II’s living quarters in the castle. It meant he could look out those windows and watch the ships go by. That was more than a pretty picture—each one of them was required to pay Sound Dues that went into replenishing the royal coffers after years of war. In other words, every ship that went by made Denmark, and the king, richer.

Because of its connection to Hamlet, it has become something of a thing for the famous Shakespearian play to be enacted in situ. The tradition of performing Hamlet on location at Kronborg Castle dates back to 1816 when the play was first performed here on the occasion of the bicentenary of Shakespeare’s death. In 1937, Laurence Olivier and Vivien Leigh performed as Hamlet and Ophelia in the castle’s courtyard. Since then, other acclaimed actors have performed the play here, and a movie version was even filmed here that used the castle as its movie studio.

But for visitors, one of the intriguing variations are in-place performances where the action wanders around different parts of the castle. It starts in the main courtyard, and various scenes are conducted in other rooms. You can find the scene schedule on a board in the courtyard near the main entrance. And as you come across actors throughout the castle they’ll be more than happy to pose for photos in character.

One of the most famous attractions of Kronborg Castle is a large statue of Holger the Dane by Hans Peder Pedersen-Dan. You can find it in the tunnels underneath the castle.

According to legend, Holger remains sleeping until he’s required to wake to save the Danish homeland.

I have more photos of Holger the Dane here.

The Royal Apartments take a floor of the castle and had the living and sleeping quarters, as well as what amounted to royal offices and reception rooms. They were used by King Frederik II and his queen, Sophie, in the late-16th century and have been refurnished to approximate their appearance at the time.

I have more photos of Kronborg Castle’s Royal Apartments here.

Kronborg’s Chapel isn’t especially large, and it’s not ornate by the standards of other European churches, but it has its charms.

A fire at the castle in 1629 left the Chapel mostly untouched, but when the castle was repurposed in the 18th century as a military garrison, the space was used for storage and training. In the 1840s it was returned to its religious purpose. It is occasionally used for royal weddings, and from time to time members of the local paris of St. Marie Church use it for weddings. The bells are still sounded on the first Sunday of each month and for church festivals.

I have more information on Kronborg Castle’s Chapel here.