The Royal Apartments at the 16th-century Kronborg Castle are where King Frederick II and his young queen, Sophie, lived and worked. 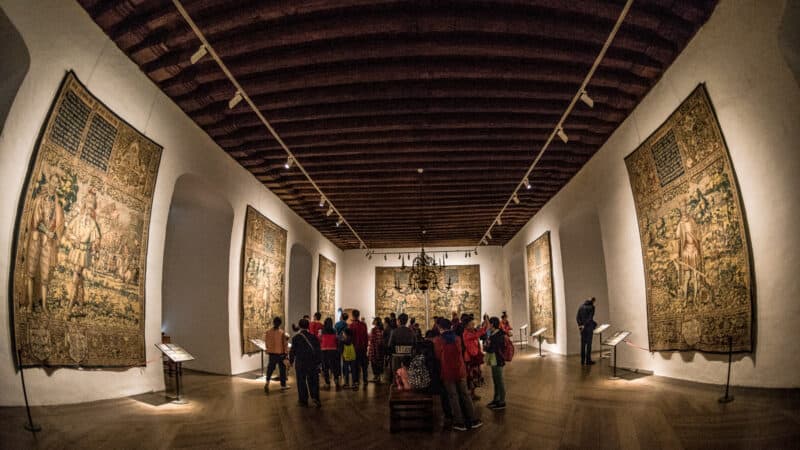 The Royal Apartments at the 16th-century Kronborg Castle are where King Frederick II and his very young queen, Sophie, lived and worked. (Sophie was 14 years old when they married.)

As you walk through them when you visit Kronborg Castle today you’re seeing rooms that have been reconstructed to appear much as they would have appeared at the time. Much of the furniture consists of either reconstructions or were acquired much later than Frederick II’s time.

Decorating various places around the castle you can find a monogrammed shield with the letters F and S. It was a bit of playfulness on Frederick II’s part. It can either be interpreted to stand for Fredericus Secundus (Frederick II) or Frederick and Sophie.

As you wander through the Royal Apartments, you’ll move through a number of rooms that were used for specific purposes.

Chancellery. This smallish room was a government office handling a full range of bureaucratic tasks that came with governing Denmark. There are large cabinets that held the king’s correspondence. (It’s believed that Frederick II was probably dyslexic, so there are few letters surviving in his hand. Most were dictated.) Other cabinets and chests held archives of anything form receipts to royal edicts to laws and proclamations.

Library. Known for his patronage of letters and learning, Frederick II’s library was stocked with a wide variety of literature from the time, with topics ranging from science to history to art to warfare.

King’s Chamber. Despite the name, this wasn’t his bedroom. It’s one of the larger rooms in the Royal Apartments and relatively airy. It was used for meetings and dinners, both for pleasure and government business. The windows of this room look down at both the castle’s main gate as well as out over the Sound.

There are several paintings embedded into the ceiling depicting members of the royal family.

One doorway is particularly decorated. It has a prominent gold monogram of C4, for Charles IV, the son of Frederick II and Sophie.

King’s and Queen’s Bedrooms. You can’t help notice how small these rooms are. That’s not a sign of austerity of humility. Far from it. Small rooms are much easier to heat–this is a cold part of the world, after all–and contrast to the bedrooms of most people of the time when multiple people shared a bed so as to maximize natural warmth. Even having a dedicated room for sleeping was itself a sign of wealth at the time.

Queen’s Chamber. Mirroring the King’s Chamber on the opposite end of the bedrooms, the Queen’s Chamber was where she spent much of the day with guests and her ladies in waiting.

Queen’s Gallery. This connects the Queen’s Chamber with the Ballroom and Chapel. Doorways off the hall led to rooms of some of the Queen’s senior staff.

The Gallery doesn’t look particularly special today, but originally the floor was decorated with a painted pattern of indigo and yellow and red wool covered the walls.[^fn1]

Ballroom. The longest ballroom in northern Europe (at 62 meters long), this was the epicenter of royal entertainment. It wasn’t just for dancing; it was also used for extraordinarily lengthy banquets. The walls were decorated with paintings and tapestries; most of the tapestries have been moved out and some are displayed separately now.

Originally, the ceiling was decorated with wood carving. Today the ceiling is of plainer timber.

King’s Tapestries. These are among Kronborg’s most famous draws. The collection of 43 large tapestries depict Denmark’s history and royal lineage. They were commissioned by Frederick II in a fit of pique at a similar collection that his rival, Eric XIV of Sweden, had commission to tell Swedish history.

Duchess of Mecklenburg’s Chamber. Part of the North Wing of the castle, this large room–or really one big room and some smaller ones–was used by Frederick II’s mother-in-law.

Food & Drink. There are some cafes within the castle fortifications and many more options a short walk away in the town.