LUANG NAMTHA, Laos — The rugged, mountainous terrain of northern Laos is beautiful. While well off the beaten track and not really on the road to anywhere else, Luang Namtha and Oudomxai provinces are well worth seeing. 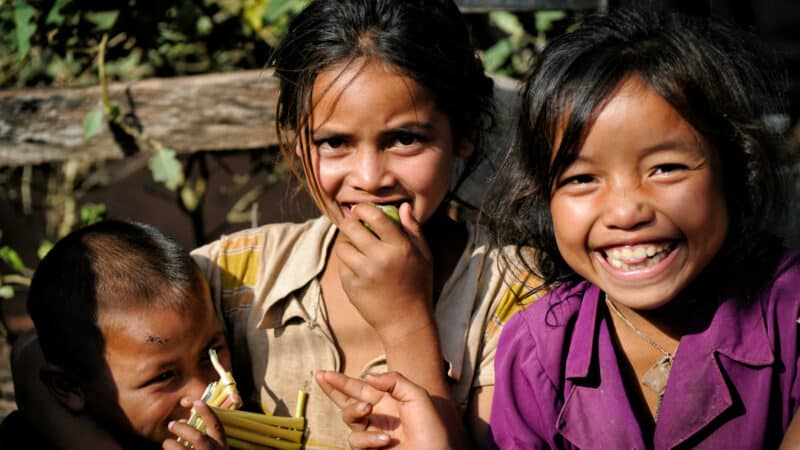 It’s bumpy, windy, and dusty. And since the road, known only as road number 13, is in much need of repair in many places and makes for such slow-going, you’ll have plenty of time to admire the view.

And what a view it is. The rugged, mountainous terrain of northern Laos is beautiful. Number 13 is one of the very few roads that pass through Luang Namtha and Oudomxai, the second- and third-most northerly of Laos’ seventeen provinces. And if there are few roads, there are even fewer trains–actually, there are none at all in Laos–so road is really your only option for getting around. The single-lane road winds its way along the tops of mountains and along ridges. In many places, it’s best not to look down if you’re nervous about heights, especially since this is not a place where the market for safety barriers is making anyone rich. Some of the road is paved, some isn’t–an annual casualty of the rainy season. So for many miles, you’ll be bumping your way along what amounts to a dirt track.

Every few miles a village straddles the road. The traditional wood and bamboo houses of the Hmong and Kmu sit only a few feet from the road, the Kmu houses on stilts and those of the Hmong low to the ground. And as the Lao government continues its efforts to relocate people from remote villages high in the mountains to new, ethnically integrated villages along the road, where they can more easily have access to basic utilities like electricity and running water, these roadside villages are getting more numerous. But as you pass the steep mountain peaks, you’ll also see in the distance many of the small, wooden huts used by farmers for tending and harvesting their mountain rice fields, often perched on impossibly steep mountainsides approachable only by foot. Integration and consolidation might be the government watchwords of the day, but modernization is still taken in baby steps.

Luang Namtha and Oudomxai provinces are solidly rural. Nevertheless, as remote from the bigger town as some of these villages are, several are quite prosperous thanks to money coming in from their massive northern neighbor: China. A particular specialty, well-suited to the lush terrain, is the growing of a rubber trees, and thanks to the voracious appetite of China’s humming industrializing economy for rubber, many of the local villages in this part of northern Laos have become rich, at least by Lao standards.

So lucrative is the oozy crop that the provincial government has evidently decided to turn a blind eye to the creep of farming into the Nam Ha National Bio-Diversity Conservation Area, supposedly an ecologically protected zone. Hillsides have been cleared and rubber plantations encroach well inside the zone’s borders.

It becomes easy, after hours mount up travelling along road number 13, to take this combination of beautiful mountain scenery and small, traditional villages for granted. But it’s a striking contrast to the flat terrain of the town of Luang Namtha. Transliterated as “greater area of the River Nam,” translated as “”Royal Sugar Palm” or “Royal Green River,” and pronounced “lwung namta” (the “h” of “th” is always silent), the town is a regional hub and a provincial capital–there’s even an airport, albeit not a big one. A shiny, new provincial museum building does double duty as a conference and meeting center. But despite some efforts by the few hotels in town to promote eco and adventure tourism, this is still somewhere off the usual beaten track for tourists.

Which is a shame, because that view along road number 13 is quite something.

There is a small airport in Luang Namtha, but in general this isn’t somewhere you just turn up on a whim. There are some tourist lodgings, but in general it doesn’t have a lot of infrastructure in place for foreign visitors. Much of the people coming in and out of the area are related to the Chinese companies in the area. Of course, being off the beaten tourist track definitely has its appeal.