It’s probably the most famous landmark in Brussels, perhaps in all of Belgium. And yes, it really is a statue of a little naked boy peeing. 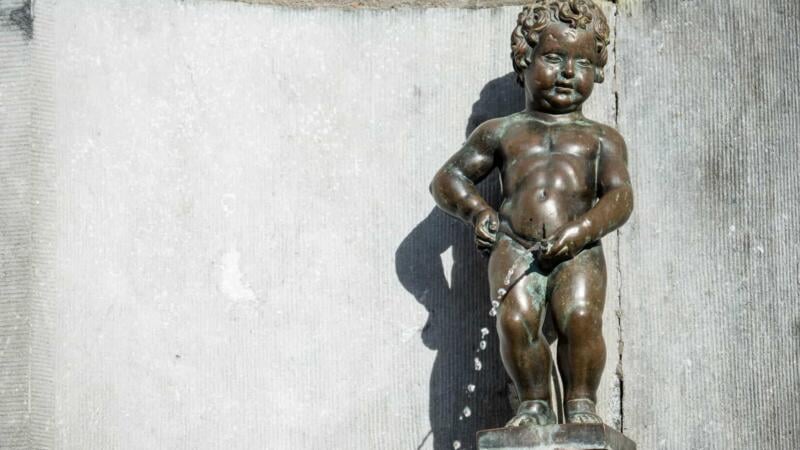 The Belgians are a quirky lot. (But gosh they make great beer and chocolate!) There aren’t too many places that would proudly embrace as a national and city icon a small bronze fountain statue of a naked little boy peeing. And it’s not like this is some bawdy, oddly voyeuristic modern artthe bronze version that’s there now was first installed in 1619, replacing a similar stone version dating back perhaps to the 14th century. (Technically, the one you see there now dates only to 1965the bronze original was stolen several times and is now on display in a much safer location indoors at the Museum of the City of Brussels on Grand Place, along with hundreds of his costumes.)

Mannekin Pis is on a corner in Brussels’ old town, a few blocks from the beautiful Grand Place. It’s not exactly the Eiffel Tower, but it has become probably the city’s most famous landmark. Crowds of tourists mill around it taking snapshots. Neuhaus chocolates surely pay a pretty penny in rent by snagging the spot next door. And colorful plastic statues of said little boy urinating are used to anything from chocolate to waffles to t-shirts and postcards.

And in case you’re thinking the whole thing sounds distastefully sexist, fear not. There’s now another statue of a little naked girl squatting to relieve herself across the other side of Grand Place (but it’s tucked away in a dark alley, obscured by a heavy grill, and generally much less impressive). Ah, the Belgians.

It’s just a fountain on a street corner, so there are no tickets and it’s accessible 24 hours a day. There are often crowds of tourists taking selfies.

Sometimes it’s naked, as in these photos, and sometimes it’s dressed in a costume. You can see some of the costumes on display at the Museum of the City of Brussels on the Grand Place, a few blocks away.