You’d never know it today, but Coba, on Mexico’s Yucatan Peninsula, was once an important and powerful Mayan city. But it has long been in ruins. 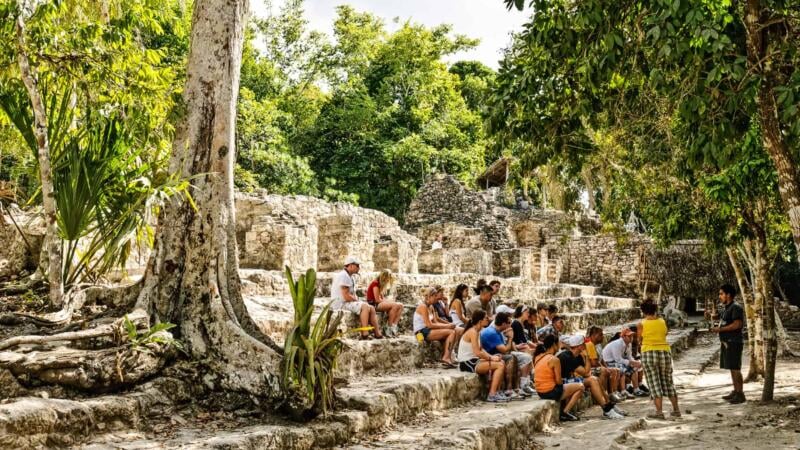 As you wander over and around the Mayan ruins of Coba, now very weathered and overgrown with forest vegetation, it’s hard to imagine that before the Spanish arrived, going back 1,300 years, upwards of 50,000 people lived here. And while the full extent of the city is still not fully known, it may well have been the largest city in the Mayan world.1

Not nearly as famous nor as overrun with tourists as its other nearby Mayan ruins like Tulum (27 miles away) and Chichen Itza (56 miles away), Coba played an important part in the Mayan civilization on modern-day Mexico’s Yucatan peninsula. It was at an important trading crossroads but also close to the sea, and the residents of Coba made extensive use of the nearby coast to trade down the coast and throughout Central America, including Guatemala and Honduras.

The city sat next to two small lakes (and if you’re so inclined, you can now ride a zip-line from the main parking lot over the water across one of the lakes across to the other side). And from the city radiated a number of perfectly straight, paved roads, the longest of which ran almost 62 miles. It’s still not known why these roads, known as Sacbe, were built so wide, straight, and flat. After all, the Maya did not have large pack animals to tow carts or wagons. There are two well-preserved ball courts on the site as well as several buildings that still survive. One of the striking things about the site is that it hasn’t been cleared, and unlike some sites where there’s been quite a bit of clearing, you really get the sense of wandering through a forest.

Photos of the Coba Ruins

Coba is easy to get to from Valladolid (37 miles) or Playa del Carmen (68 miles). Getting there early in the morning will make it more likely there’ll be fewer people and that you’ll get to see the local wildlife.

Take good walking shoes. The paths can be uneven, muddy, and rocky.

The site is spread over a large area. You can walk or hire bicycles on site to explore.

Take a bottle of water. Aside from a few small shops around the parking lot, there are no amenities within the park.