Panama isn’t an island, but with such a high proportion of coastline to land, it might as well be. So it’s only natural that seafood figures prominently in Panamanian cuisine. 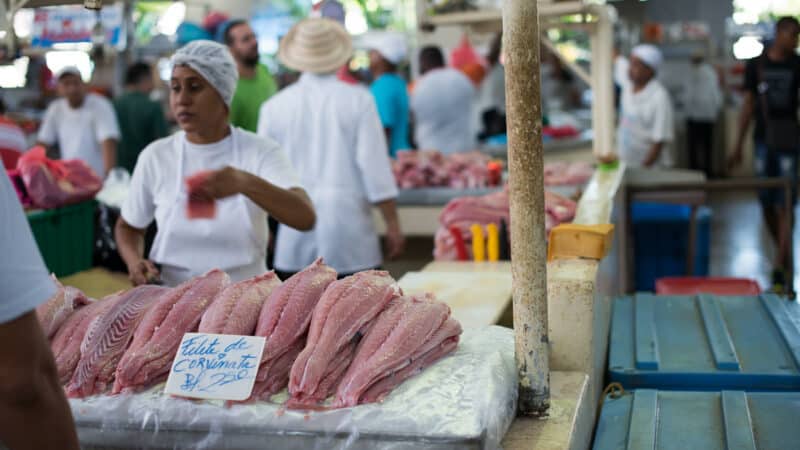 Panama isn’t an island, but with such a high proportion of coastline to land, it might as well be. So it’s only natural that seafood figures prominently in Panamanian cuisine.

Panama City’s seafood market, the Mercado de Mariscos, lies at the foot of the historic Casco Viejo district and is, as you would expect, bustling.

It consists of two parts. To the left is the market proper, where you can buy freshly caught seafood fresh off the fishing boats you see in the bay. This part of the market opens early–around 5 am, as the fisherman arrive in with their overnight catch. Fresh fish, lobsters, and shellfish are all laid out on ice or swimming in buckets of water.

But unless you have your own kitchen to cook your own feast, chances are that the other part of the market is more useful to you. That’s where the restaurants are, where the freshly caught seafood is served up for your dining pleasure.

These aren’t fancy joints. They’re essentially counters with plastic outdoor seating. Latin tunes blare over the speakers, and some have TVs jury-rigged under the canopy showing the soccer game of the moment. It’s more like Istanbul’s Karakoy waterfront than San Francisco’s Fisherman’s Wharf.

The local specialty is ceviche, served in cups, where the raw fish is “cooked” in citrusy juices. A cup of ceviche fish or octopus (pulpa) will set you back a dollar or two, and you can order fries on the side of you like and wash it down with a cold Panama beer.

Platters, which are generally fried fish or fried something else like mussels or prawns, are more expensive. While there’s not the same variety as somewhere like the Santiago de Chile’s Mercado Central, which has an incredible variety of shellfish thanks to the country’s endless shoreline, all the basics are covered, from fish to octopus to prawns.