ISTANBUL, Turkey – Istanbul’s mosques dominate the city’s skyline, and their understated and elegant interiors can be stunningly beautiful. Here are some examples from some of Istanbul’s most famous mosques. 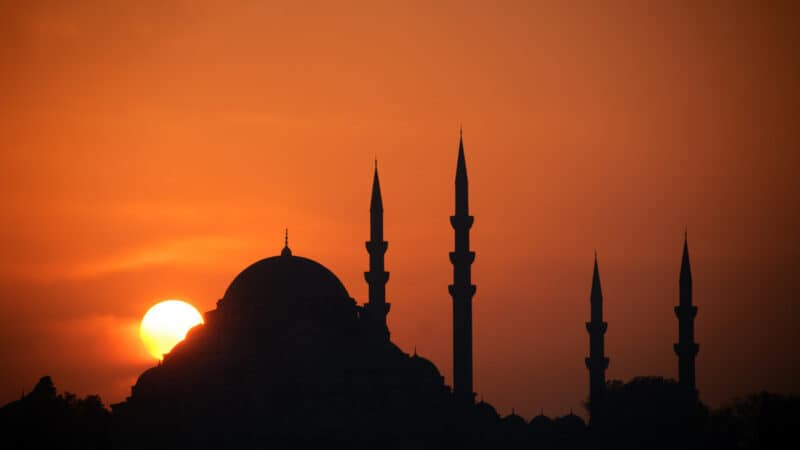 “The beauty I see in Suleymaniye Mosque is in its lines, in the elegant spaces beneath its dome, in the opening out of its side domes, in the proportions of its walls and empty spaces, in the counterpoint of its support towers and its little arches, in its whiteness, and in the purity of the lead on its domes.”

Perched strategically on many of the city’s highest points, Istanbul’s elegant mosques dominate the city’s skyline. With their Ottoman-style domed central structures and minarets towering over a city that has mostly shunned tall western-style skyscrapers, the mosques provide a distinctive and exotic silhouette of a fascinating city.

There are a lot of mosques in Istanbul—a recent count pegged the number to be just shy of 3,000—but three of Istanbul’s mosques really stand out—the Blue Mosque (Sultan Ahmed Mosque) and Hagia Sophia (Aya Sofya) in the heart of Sultanahmet, and Suleymaniye looming over the Golden Horn—and it is to these that most visitors understandably flock, but many others are scattered throughout the city.

Old Christian cathedrals like Westminster Abbey in London, Reims Cathedral, St. Vitus Cathedral in Prague, St. Peter’s in Rome, or Notre Dame in Paris, revel in their opulence. Over centuries, they’ve tended to accumulate a hodgepodge of tributes, statues, paintings, and stained glass, and some of the most impressive are so because of the sheer accumulation of gaudy and opulent clutter collected over centuries, with paintings, statues, and a mishmash of other paraphernalia crammed into dank and musty nooks and crannies tucked into the building’s perimeter.

Although the earliest ones derived inspiration from some of Christendom’s most soaring cathedrals, Istanbul’s mosques are in stark contrast with that kind of piecemeal approach, aiming instead for understated and functional.

That isn’t to say they are any less impressive—far from it, they achieve an impressive elegance. But they save their decorative wow-factor for the astonishingly intricate and colorful ceramic tiling that covers much of the interior. A massive central dome—an architectural and technological marvel in its own right—sits above the main worship space, and rather than the altar of a Christian church, the focal point for worship is a comparatively simple mihrab, a semi-circular niche in the wall indicating the direction of Mecca. Where Christian churches are crammed with chairs and pews, the mosques have only open floor covered with a massive expanse of ornate Turkish carpet.

The Call to Prayer

One of the most striking aspects of the mosques is something that you can’t see. Look closely at the minarets on many mosques and you’ll see megaphone-shaped loudspeakers mounted partway up that serve to blare out the call to prayer five times a day, making it audible for much of the surrounding area. Along with electrical lighting, they provide one of the few nods to modern technology.

Although their message remains simple and constant, the calls, sung by a single voice for each mosque, are wonderfully melodic and musical, as each singer adds his own interpretative style. Responding to the call, worshippers gather in the mosque for service, kneeling facing the mihrab with worship led by the imam.