WATERLOO, Belgium — Ferme du Caillou, next to the battlefield of Waterloo, is where Napoleon spent the night before the Battle of Waterloo. The next day, his empire was in tatters. 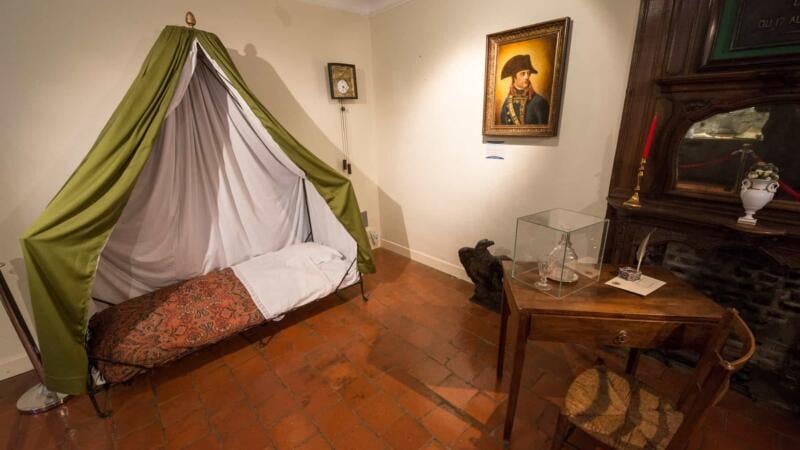 It was here that Napoleon spent his last night before his empire crumbled for a second time. About two miles up the road to the north, the Duke of Wellington‘s multinational army bivouacked for the night. Not quite three miles behind them, in the village of Waterloo, Wellington himself fretfully spent the night preparing.

Tomorrow there would be a battle in the farm fields just outside the town of Waterloo. If Napoleon won–as he had so many times, the allied armies lined up against him would be in disarray and there would be nothing stopping him from marching north to claim Brussels and thence reclaiming much of Europe. If he lost, well . . . One suspects Napoleon didn’t spend much of that night contemplating what might happen if he lost.

Napoleon dined alone, in a room in the farmhouse of Le Caillou. In an adjoining room, another table had been set for his aides-de-camp and several high-ranking officers, among them Colonel Combes-Brassard, the VI Corps chief of staff. In the course of the officers’ dinner, one of them spoke in a loud voice about the battle awaiting them on the morrow, and the emperor heard him. Napoleon burst into the room and took a few paces with his hands behind his back; then, without turning around, addressing no one in particular, he exclaimed: “A battle! Gentlemen! Are you sure you know what a battle is? Between a battle won and a battle lost, there are empires, kingdoms, the world—or nothing.” [Alessandro Barbero, The Battle (2009)]

His officers had commandeered the farm house to serve as Napoleon’s headquarters on the eve of battle. It was well appointed as farm houses go. They nevertheless had most of the existing furniture moved out of the building–along with the farmer’s family–so that the Emperor’s entourage could set it up for the his use.

But not all the furniture. The kitchen tables stayed. Napoleon’s senior officers ate their dinner there. More importantly, after breakfast on the morning of the battle, the tables were pushed together and the maps of the battlefield laid out. A masterful map reader, Napoleon explained to his officers crammed into the room over breakfast how he wanted the battle to unfold.

Had Napoleon ordered his army to attack first thing in the morning, as he was usually inclined to do, events might have unfolded quite differently. But heavy rains the day before and overnight had turned the farm fields to mud. Dragging canons through heavy mud is slow going. And the speed and agility of the cavalry is undermined.

So Napoleon bided his time. Battle would joined at the very civilized hour of 11:30am. As it happened, the delay was enough that late in the day the Prussian army under Field Marshal Blücher could connect up with Wellington’s exhausted army. It may or may not have made a difference in the end–so many other factors came into play during the battle–but it remains one of history’s great what-ifs. As he stepped out on the farm house’s front steps to mount his horse to the cheering of his troops, the air was pregnant with possibility.

By that evening, he was scrambling to flee on horseback after his carriage got bogged down in the chaos of the retreat. Four days later, he abdicated for the second time and the Napoleonic era was over.

You can’t quite see the actual battlefield from the farm house’s front steps. It’s obscured just beyond the same deceptively gentle undulations that Wellington took such good advantage of during the battle. But as you wander through the museum’s few rooms where Napoleon spent that historic night and morning, it’s fascinating to image what it must have been like on the night of June 17, 1815.

The farm is known in French as Ferme du Caillou. In English it translates as Pebble Farm.

Napoleon’s last headquarters is now a museum. It’s small, but interesting. The ingeniously mobile camp cot Napoleon that attempted to get some sleep on is there. The kitchen tables on which he laid out his battle plan are there. There are various Napoleonic knick knacks, period artifacts, and ammunition and weapons recovered from the battlefield. There’s also a skeleton of a hussar killed during the battle laid out and rather exposed in a glass cabinet in the middle of the room, a jarring reminder that it wasn’t all rousing tales of courage and colorful uniforms.

While you can buy entry tickets individually for each of the nearby attractions related to the Battle of Waterloo like the Butte du Lion and Wellington’s headquarters, it’s much more cost-effective to buy one of the passes that offers entry to all of them. Ask about them at the ticket counter at any of the venues.