The Narita-san Temple is a 1000-year-old Shingon Buddhist temple complex in the heart of Narita, about 40 miles east of Tokyo. 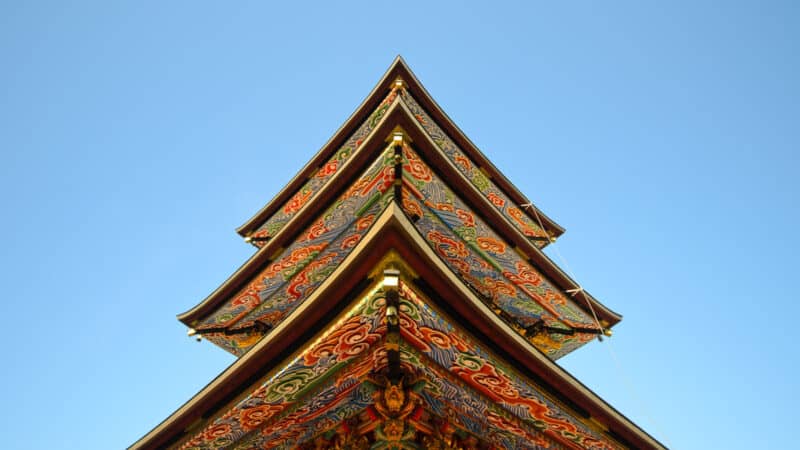 The Narita-san Temple is a 1000-year-old Shingon Buddhist temple complex in the heart of Narita, about 40 miles east of Tokyo. Also known as Shinsho-Ji (New Victory Temple), it isn’t a single building but rather a large complex of several buildings spread across scenic parkland on top of a hill. While the temple was founded in 940, most of the buildings have been added since the early-1700s.

The main deity to whom the temple is dedicated is Fudomyoo, or the Unmovable Wisdom King. Surrounded by flames, holding a sword and rope, and unequivocally blue, his ascribed skill set is both impressive and useful: remover of anxieties, banisher of evil, and savior from oppression. An image of Fudomyoo occupies pride of place in the center of the Great Pagoda of Peace, a 58m pagoda towering on top of the mountain.

The ornately and brightly painted Three Storied Pagoda, off to the side of the main courtyard of the Great Main Hall was originally built in 1712 and is decorated with painted dragons and sculptures of the 16 disciples of Buddha, or Juorokurakan. On the first floor’s inner sanctum, which you can’t access–at least, not normally–is Gochi-Nyorai (Five Tathagas) who is believed to be endowed with the five wisdoms of Buddha.

As impressive as the buildings are–and they are impressive, as well as being especially well cared for–the grounds are appropriately beautiful, especially in the fall. Fiery reds and oranges of the autumn leaves color the landscape quite spectacularly. And tranquil water features, including a small lake and running streams add to the sense of serenity. The combination makes it easy to forget that you’re in one of the most densely populated regions of the world and within a few miles of a major international airport.

If you have more than a few hours layover at Narita Airport during the day, the temple makes for a great excursion. From Terminal 1, it’s about 10 minutes by train (2 stops). If you’re arriving by an international flight, you’ll have to clear immigration and customs on the way out and immigration and security on the way back in. Allow at least 30 minutes for exit and entry (but it can be quicker). You don’t need to pick up your checked luggage. Be sure to check whether you need a visa to enter Japan. There are luggage storage services in the terminal (outside the security checkpoint).