Although not the highest or even the wettest, Niagara Falls might just be the most famous waterfalls in the world. And they’re very easy to visit. 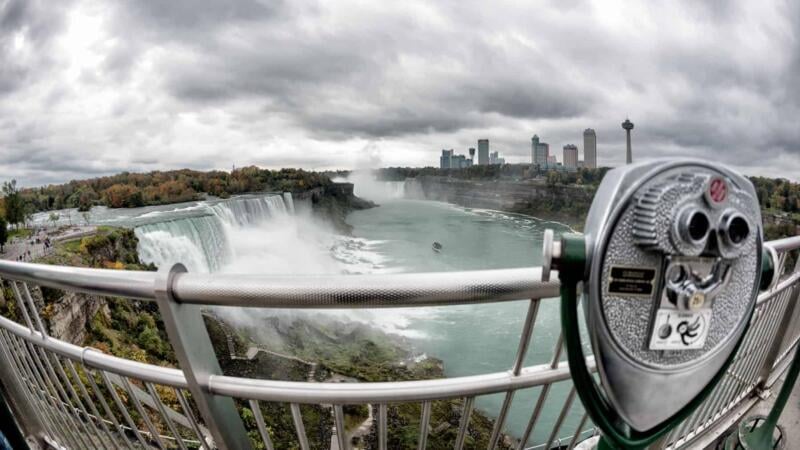 “Niagara” has become synonymous with a mighty, overwhelming flood, not by height or volume alone–nearly 100 falls are higher, and at least two carry greater flow–but because of the 186-foot leap of a tremendous amount of water.

They’re not the highest falls in the world or even the wettest. But they are probably the most famous, something that’s been helped along by how easy it is to get to them. They sit on the border between the United States and Canada, not far from both Toronto and Buffalo.

The plural in the name is because there are actually a couple of distinct waterfalls, with the water flow split by an island. The American Falls are the smaller of the two main sections, with somewhere between 6 and 10 percent of the water flowing over them. Much larger, and much more impressive, are the Horseshoe Falls on the Canadian side (they’re sometimes called the Canadian Falls), over which the rest of the water passes. And there would be even more water flowing over the falls if some of it wasn’t rerouted for hydroelectric power (the flow is throttled according to aesthetics for tourist viewing).

If you’re inclined to get up close and personal with the falls, it’s unusually easy here. There’s no hiking through the jungle or risking treacherous rocks involved, although there’s an excellent chance of being drenched, even with the light ponchos that are part of the price of admission.

Thanks to the iconic tourist business Maid of the Mist, there’s a viewing platform on the American side with a wonderful view of the American Falls and an elevator that takes you down to water level. From there, you can take a half-hour ride on one of several boats named Maid of the Mist that takes you up into the swirling cauldron at the base of the Horseshoe Falls (see the first video below). You can also do a short walk on a paved path (with a safety railing) up closer to the falling water (see the second video below). There’s a similar path (with a separate price of admission) on the other side of the American Falls, approached from Goat Island.