LONYEARBYEN, Svalbard — Formerly known as the Spitsbergen Airship Museum, Longyearbyen’s North Pole Expedition focuses on several attempts around the beginning of the 20th century to reach the North Pole by air. 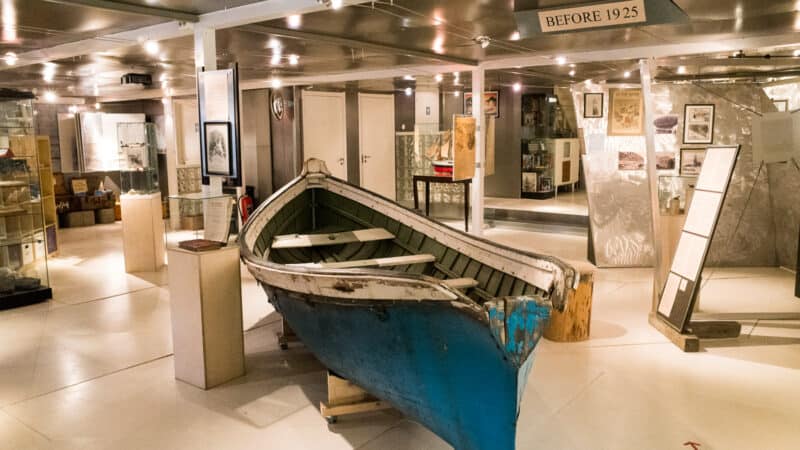 Longyearbyen isn’t very big, but there are two museums in town. This is the older but smaller of the two. It focuses on efforts to reach the north pole with various types of aviation, some successful and some not.

It’s located in Longyearbyen, Spitsbergen. It was originally founded in 2008 in the space previously used by Longyearbyen’s pig farm, a space it originally shared with the Svalbard Museum. In 2012 it was moved to its current home.

The key exhibits focus on three airship expeditions of the early 20th century to try to reach the North Pole.

The museum is surprisingly light on original artifacts from these expeditions–there’s not a lot of room, after all. Most of the exhibits consist of historic films, photos, maps, newspapers, postcards, drawings, and clothes. For obvious reasons, there are only a few small fragments of the airships’ skins.

The North Pole Expedition Museum is in a black building across the street from the newer and larger Svalbard Museum. If you’re walking down the town’s main street, keep going down the hill toward the waterfront–it’s around the other side of the Svalbard Museum.

As with some other public spaces in Longyearbyen, you’ll be asked to either remove your shoes (there are some free lockers at the main entrance) or put on blue shoe covers that are provided next to the front door.