Nuruosmaniye Mosque is newer than many of the other mosques in Istanbul, and its ornate Baroque style sets it apart. 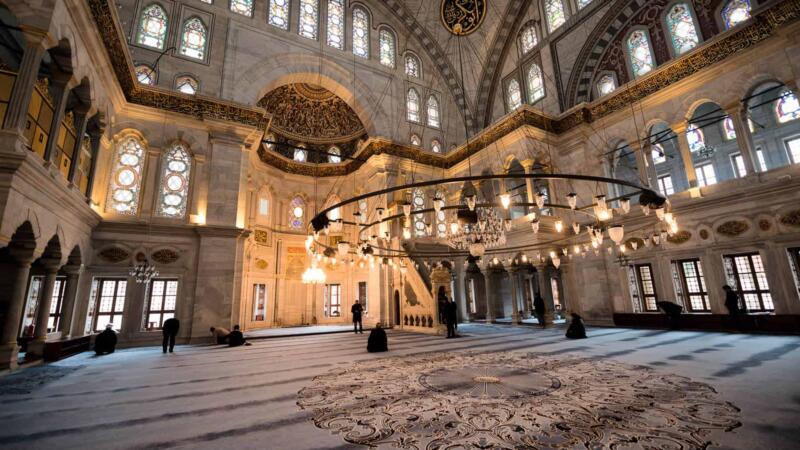 Compared to many of Istanbul’s other mosques, Nuruosmaniye is quite new. It was built between 1748 and 1755. So it’s still not exactly a new build.

While it shares some distinctive design features with other mosques in Istanbul, Nuruosmaniye Mosque was the first and largest mosque to be built in Baroque style. The prayer hall is covered with a single dome large dome—one of the largest domes built in Ottoman mosques—that is illuminated with 32 windows.

Throughout the mosque are 174 windows that provide quite a bit of natural light. It’s also distinctive for its polyangular cloister, making it unique in Ottoman architecture. And its interior, while ornate, is a bit more restrained than some of the others.

The mosque complex also has a madrasa (religious school), imaret (soup kitchen), a library, a tomb, and a marble public water fountain. Recent restoration works also discovered another dozen rooms beneath the mosque.

Its construction was ordered and funded by Sultan Mahmud I (reigned from 1730 to 1754), who was also known as the Hunchback. He died before it was completed, but his brother, Sultan Osman III, who succeeded him to the throne, saw the project through during his brief reign. When it opened it was given the name Nur-u Osmanh, meaning ‘divine light of the Ottoman.’ The brothers were both interred nearby in Valide Sultan’s Tomb, next to the New Mosque and Spice Bazaar.

Photos of Nuruosmaniye Mosque in Istanbul

It stands next to Gate 1 (Nuruosmaniye Kapisi) of the Grand Bazaar.