Originally designed to house the national theater, the Palacio de Bellas Artes has become a cultural hub in arguably the most beautiful building in Mexico City. 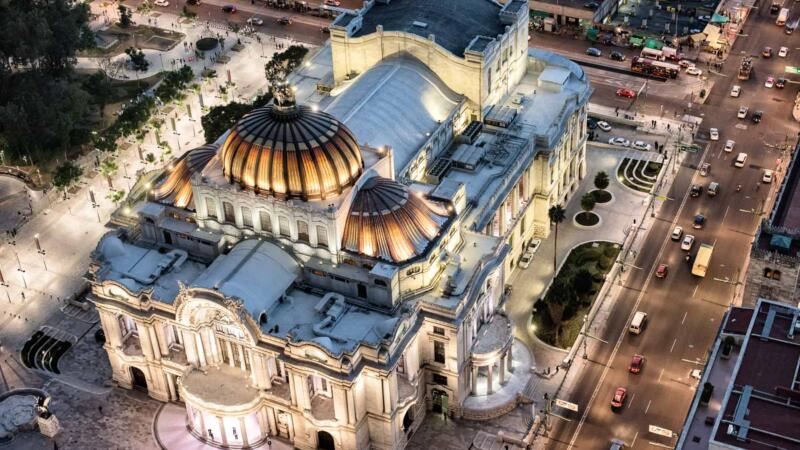 The Palacio de Bellas Artes was built in the early 20th century to house the national theater, but it has become more than that. Some call it the “Cathedral of Art in Mexico.”

It has become a cultural hub of Mexico City–in addition to containing two theaters, there are important murals on display and a rotating architectural exhibition inside. Outside, it sits on the end of the Alameda Central park, a popular and scenic spot for locals to gather on a pleasant early evening amidst the hubbub of the city the sounds and the unevenly tuned melodies of the organilleros.

The building is also widely regarded as the most beautiful in Mexico City. It’s an unusual mix of Art Nouveau and Neo-Classical on the outside and soaring Art Deco on the inside. It makes for a striking combination, but it somehow works. It was conceived around 1905 but not actually completed until the mid-1930s.

The most eye-catching feature from the outside is the colorful roof dominated by three cupolas covered with orange and yellow tiles. On top of the main cupola is a cluster of statues depicting a Mexican eagle and figures representing the dramatic arts.

The roof sits atop a Neo-Classical structure clad in Italian marble and lined with columns and statues representing the dramatic arts.

Inside is quite different. It’s a bit like an Art Deco movie set, with strong, sharp lines and richly colored marbles. After a small entrance hall, you move up a short flight of steps to the main atrium. In here, you’re standing directly under the domes that you see on the outside.

Lining balconies around each floor in the atrium are exhibitions. The most striking is the permanent display of large murals by painters such as Diego Rivera and David Alfaro Siqueiros. Mostly dating to the 1930s through the 1950s, the murals sometimes explode out of their space and start creeping out along the ceiling.

The very top floor is devoted to the Museo Nacional de Arquitectura (National Museum of Architecture), which has a rotating exhibit related to Mexican architects and architecture.

The park area around the building is open 24 hours. To enter the building you’ll need to pass through a security checkpoint. You’ll then be in the main entrance hall, which is where the box office counters are, along with an up-scale restaurant and large bookstore focusing on art and performance.

To get up to the exhibits on the upper floors you’ll need a museum ticket. It’s open Tuesday through Sunday from 10am to 5:30pm. A single adult ticket costs 62 pesos. There are various categories for free entry, including kids under 13, seniors over 60, students with ID, etc. If you want to take photos or video you’ll need to pay a supplement of 30 pesos.

It’s located six blocks west of the Zocalo, on the end of Alameda Central park.