Panorama of the Battle of Waterloo

The Panorama of the Battle of Waterloo, in its own building next to the Lion’s Mound, brings an old-world tourist immersive experience. 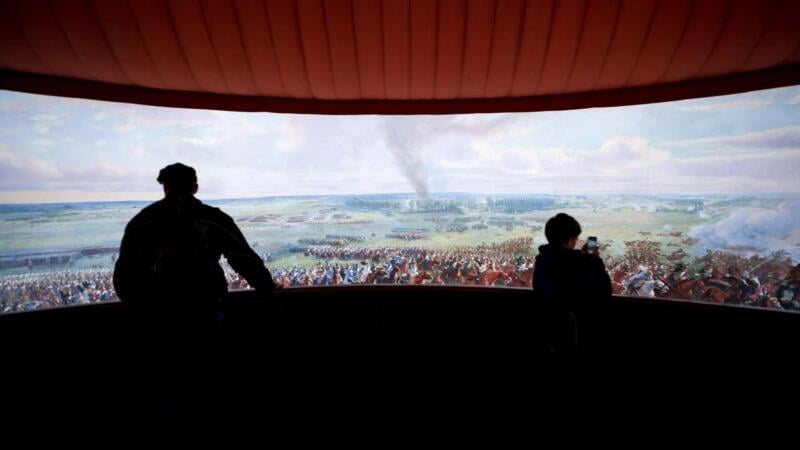 Standing at the base of the Lion’s Mound (Butte du Lion) at the battlefield at Waterloo, the Panorama is one of the world’s few remaining panoramas, a type of tourist attraction that was once very popular. Few of them survive today–they can’t compete with moving pictures for visualizing what happened, and they take up quite a bit of real estate and maintenance.

The panoramas of the late-19th century and early 20th century were designed to be visual feasts, to convey the drama of the historical moment or a famous landscape depicted in them in an age predating film. It’s immersive in an early-20th century kind of way.

Housed in a purpose-built cylindrical building, the Panorama of the Battlefield of Waterloo, or Panorama de la Bataille, preserves that old-world tourist attraction and is surprisingly effective not just for visualizing the Battle of Waterloo, but also in conveying a sense of the generations who have recognized the importance of that moment in history.

On the inside walls of the cylindrical building is a massive 360-degree canvas painted by Louis Dumoulin in 1912. It was commissioned for the 100th anniversary of the battle. The painting measures 361 feet (110m) around and nearly 40 feet (12 m) high. At the base of the painting are sections of a life-size diorama depicting gory details of the battlefield, mud, dead horses, and all. Sound effects evoke the noisy commotion of the day.

Dumoulin’s painting can, of course, depict only a composite moment of what happened on that day, but the painting is lined up geographically with the surrounding countryside, designed to give a sense of scale and direction to what happened. It depicts the cavalry charge by Marshal Ney in the foreground, Napoleon surrounded by his staff to the south, and the Duke of Wellington protected by defensive infantry squares to the west.

I also have a 360-degree virtual tour of the Waterloo panorama.

Photos of the Waterloo Panorama

Panorama of the Battle of Waterloo