I’m standing right above the middle of the river, 25 feet above the water surface. And I don’t smell a thing. The Perfume River, it turns out, is only fragrant at a specific time of the year, in the autumn, when the flowers in the orchards up river lose their blossoms into the water. 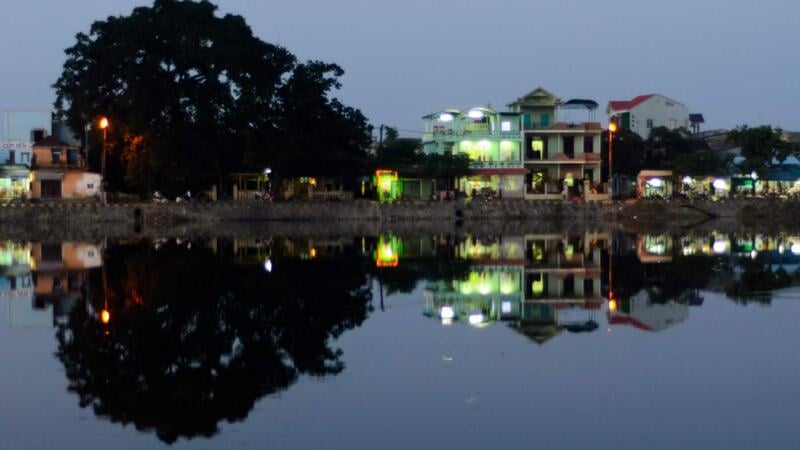 I’m standing right above the middle of the river, 25 feet above the water surface. And I don’t smell a thing.

Well, that’s not entirely true. There’s that vaguely humid, dusty smell that you find in so many areas in the tropics. And the exhaust fumes from the thousands of motorbikes and scooters whizzing by on the Phu Xuan Bridge are plenty strong. But perfume? Not so much.

The Perfume River (or Hương Giang or Sông Hương), it turns out, is only fragrant at a specific time of the year, in the autumn, when the flowers in the orchards up river lose their blossoms into the water. The decomposing flowers apparently become quite pungent as they float past to the South China Sea about 10 miles further downstream. And although I’m there in the autumn, it’s evidently too late. There are no flowers to be seen or smelled anywhere.

What there is, though, is a calm brown river about 350 yards across. I’m surprised at how few boats there are. The water isn’t pretty, at least in broad daylight. It’s a soupy brown, in part because of the dredging that some locals do to sell the sand to cement manufacturers. Behind the market, families living on boats bathe in the river; it’s their kitchen and bathroom. Fishermen try their luck with nets and long, thin, wooden boats known as sampans. But for the most part, there’s surprisingly little use made of the Perfume River, at least in the section that passes through the central Vietnamese city of Hue. If you like, you can rent a tourist boat for a few dollars, replete with a bowsprit of a brightly painted dragon’s head (perhaps it supposed to be traditional). I pass. A bit further along the shore, you can rent paddle boats. I pass again.

Before the setting sun disappears below the thick haze and mountains on the horizon, the orange colors create the kind of rich, golden scene of romantic visions of Southeast Asia, silhouetting the distinctive shapes of the local wooden riverboats.

It’s once the sun goes down that the waterfront in Hue really comes alive. Locals, mostly young, gather in the waterfront park in front of the university on the eastern bank. The Trang Tien Bridge (Cau Truong Tien) in lined with bright lights that change colors and reflect off the water surface. And large neon advertising signs on the western side near the Dong Ba market cast their saturated colors on the water’s rippled surface. It’s a buzzing, pretty scene, but by now the only smells are coming from the street food vendors.

Photos of the Perfume River

If you’re in Hue, you can’t miss it–the river winds right through the middle of town.