PHONSAVAN, Laos — At Phonsavan’s morning market you can sit for a tasty bowl of freshly made steaming pho for breakfast or buy some local fruit. You can find much that looks familiar, and quite a lot that doesn’t. 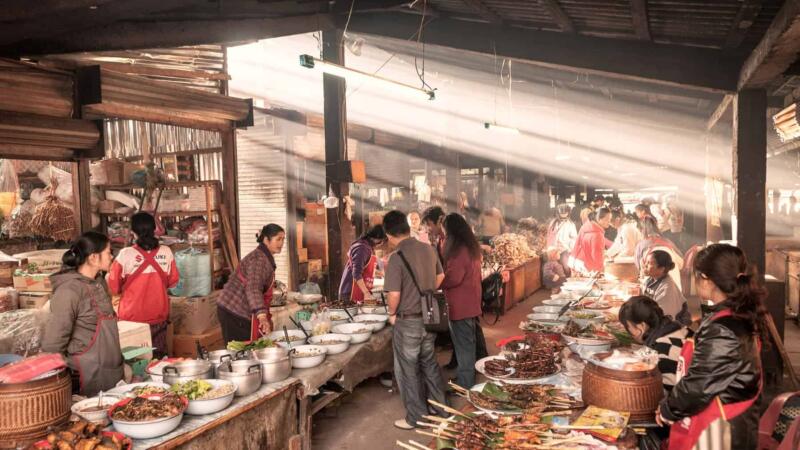 If it walks, crawls, swims, flies, or slithers, it could well turn up on your dinner table in Laos. Sure, you can buy chicken or beef or pick up some freshly caught river fish. But if you have a craving for bamboo rat, porcupine, winged critters, snake, crickets or other bugs, or even, yes, dog, you’re in luck at the morning market in Phonsavan.

There is a Cantonese proverb that says, “Anything that walks, swims, crawls, or flies with its back to heaven is edible.”

And there’s a very good reason for that. Globally, about one-third of the world’s food goes to waste. In Western countries, it’s an even higher percentage. And the consequences of that are profound, even if we don’t see them up close.

But Laos is not a country that lets a lot go to waste. It can’t afford to be. The average individual income in Laos is $3,000 per year, putting it at 176th in the world. And over three-quarters of the labor force relies on agriculture, mostly rice, with some working on Chinese rubber plantations. And the obesity rate in Laos is very low–only 2.6 percent, 179th in the world out of 191. By comparison, it’s about 33 percent in the United States.

Luang Prabang and Vientiane aren’t typical of most of Laos. To see the frugality of everyday life in Laos, you have to get out of those tourist hotspots, especially to the mountain villages of the north.

But you can get a sense of it in Phonsavan, the major hub Plain of Jars. Phonsavan is relatively new and has the feel of a frontier town. At its center is a dusty main road with shops, cafes, and tour company offices lining it. The town itself actually appears well-off (relatively speaking).

Phonsavan is most famous in the west as a launching point for exploring the archeological sites of the Plain of Jars. But it’s also a cultural hub for the Hmong population of the region. You can see that in full, colorful display if you happen to be there for the Hmong new year celebrations.

And you can also see it in a more day-to-day sense in the Phonsavan morning market, where the sights, smells, and tastes of Lao life are on full display. The market serves local communities for miles around, so it reflects more about them than it does about Phonsavan itself.

Located about a block from the main stretch, it’s covered with a roof to protect against rain and sun but otherwise open-air. Fresh fruit, vegetable, and grain vendors spread out their wears on benches alongside some unusual proteins that you probably won’t see in your local neighborhood farmer’s market anytime soon. Live, fresh fish swim in water-filled buckets. And butchers lay out their day’s offerings on butcher benches. There’s no refrigeration here, so the sellers have to judge what demand is going to be like on any given day.

At Phonsavan’s morning market, you can sit for a tasty bowl of freshly made steaming pho for breakfast or buy some local fruit. You can find much that looks familiar, and quite a lot that doesn’t.