SAGAING, Myanmar (Burma) — It’s one of the oldest–and from all appearances, richest–of the many pagodas in Sagaing. Sitting high on top of Nga-pha Hill, it was built in 1312. 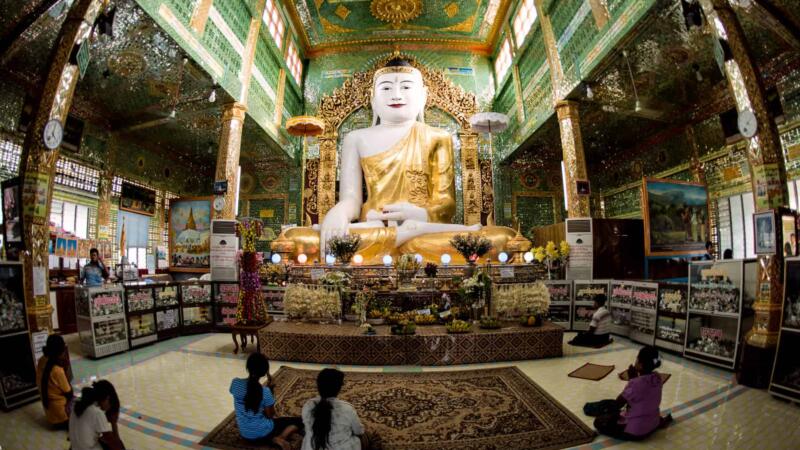 It’s one of the oldest–and from all appearances, richest–of the many pagodas in Sagaing. Sitting high on top of Nga-pha Hill, one of dozens of hilltops in the Sagaing Hills, it was built in 1312 by Minister Pon Nya, after whom it’s named.

It’s not the most subtly decorated pagoda you’ll come across, thanks to a flood of cash coming in. A few things stand out in the main prayer hall. You can’t miss the giant statue of Gautama Buddha that dominates one end, tower higher than the walls around him. He looks unusually cheery. His gold robes and throne are surrounded by jade-colored tiles that line the walls and ceiling. And there are more donation boxes in this pagoda than I’ve seen in any other, each box designated to a particular purpose.

Outside, the sprawling patios aren’t any less opulent. Colorful tiles cover the floors from which gold-covered stupas rise up. And there are great views over the Ayeyarwaddy River and surrounding hilltops.

The hill on which the pagoda sits is shaped a little like a frog. Which is how it got its name. And it also explains the large frog-shaped donation box you’ll see inside.

As with nearly all Burmese names that have been transliterated into English, you’ll come across multiple variations in spelling and rendering, including SoneOoPoneNyaShin and Sone Oo Pone Nya Shin.