You can get a lot more than spices at Istanbul’s Spice Bazaar, but spices are the undeniable stars. 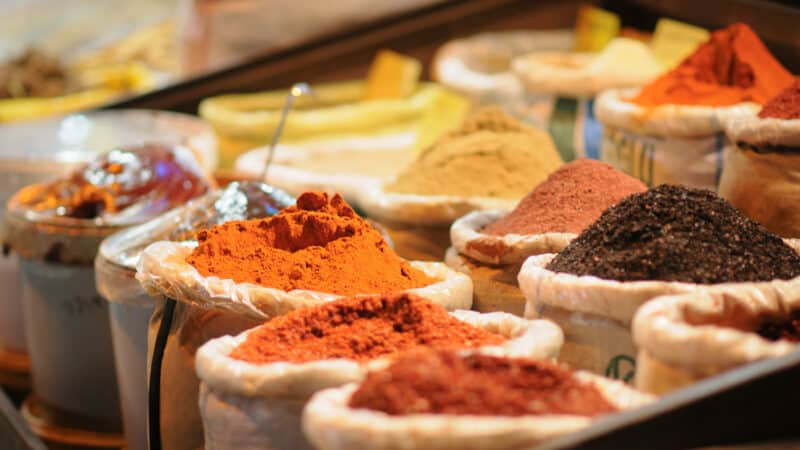 You can get much more than spices at the Spice Bazaar, but spices are the stars. They’re stacked high in mounds that are not at all like the boring little jars we get in our supermarkets. You just know that they’re going to taste better. And what colors! If you like cooking, you’ll love this place. Whether you’re after pure individual spices or mixes perfect for lamb or chicken, they’re here.

Located in the Eminonu quarter of Istanbul, next to the Galata Bridge and the New Mosque (Yeni Cami), the Spice Bazaar is one of the city’s largest and most famous markets, second only to the Grand Bazaar. It’s also known as the Egyptian Market, it’s smaller than the Grand Bazaar, but it can be just as busy. You don’t come here for Turkish rugs–the Grand Bazaar is better for that–and there’s a much stronger emphasis on food offerings like spices, nuts, dried fruits, baklava, and, of course, Turkish delight (lokum) in the traditional rose water as well as just about any flavoring you can think of. But more and more the foods are getting displaced by shops selling goods with larger profit margins like jewelry and souvenirs.

Some of the more interesting vendors are actually outside the Bazaar. Lining its exterior walls are vendors catering more to locals than tourists. There you’ll find a small fish market on one side, and on the other some shops dedicated to gardening, hardware, or even fish tank supplies. And the streets around the Spice Bazaar are especially interesting–you can find many of the same goods for sale at less touristy prices. The Rüstem Pasha Mosque nearby is also worth a look.

My favorite time down around this area is in the early evening, in the hour or two before the Spice Market closes. The Eminonu waterfront buzzes, the two plazas next to the New Mosque fill with people out and about, and the mosques fill with people.