Surfers Paradise might have a terrible name, but it has a fantastic beach. It’s exactly what you think of when you think of a Queensland Beach. 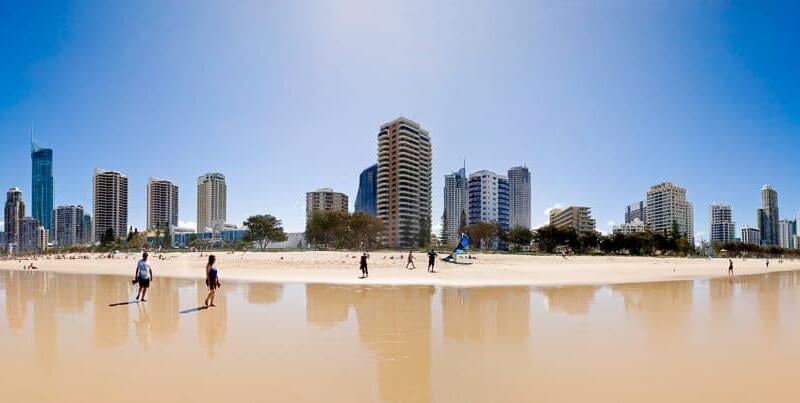 Surfers Paradise might have a terrible name, but it has a fantastic beach. It’s exactly what you think of when you think of a Queensland Beach (Tourism Queensland has obviously done something right there!). Because it’s well south of the bottom of the Great Barrier Reef and there are no islands protecting the coast, it looks out directly onto the open Pacific Ocean. And that means that waves have plenty of room to get into a groove. It doesn’t have the same sudden depth changes that make Hawai’i’s monster waves, but the waves are pretty reliably good. And, of course, it means beautiful ocean views for the holiday units along the shore.

In the past several decades the Gold Coast has seen pretty massive population growth and has become quite built up with highrises. The area around it is also getting a lot of sprawl, with suburbia spreading west, north, and south, as people move up from the colder areas like Melbourne to take advantage of the much nicer weather up north, much the way that Florida gets people escaping the North American winter. It means that pretty much the entire area is built up now, all the way to Brisbane and well down past the New South Wales border past Cooloongatta and Tweed Heads. It wasn’t that long ago that you’d drive through miles of coastal bushland to get from one to the other.

But the beaches are still stunning. As someone who spent a lot of time on Queensland’s beaches, I rarely spent a lot of time on the beach at Surfers Paradise itself, which is actually just one of many miles of great beaches extending north and south. It was always a bit too busy, a bit too kitschy for my tastes. And despite its name, the Surfers Paradise beach (or just “Surfers” to the locals–Aussies love to shorten anything they can) is usually better for swimming than surfing. For surfing and windsurfing, Narrowneck, further north is often better for windsurfers getting the afternoon sea breeze. Duranbah (or D-bah (see above[/foot] can get better breaks. Or, if you’re really game (and know what you’re doing), the reef break at Cudgean can be quite a challenge. (And there are a bunch more good surf beaches nearby.)

I must say, I’m quite fond of this shot, the way it makes the long stretch of straight beach at Surfers look like an island. I’m looking forward to trying the same technique next time I’m in Cancun. I used a very wide angle lens, stood in about ankle-deep water, and shot back towards the shore. It was shot handheld with a Nikon D200, a Sigma 10-20mm lens, processed in Lightroom, and stitched in PTGUI. Even though the sun and sand and sea would normally be an ideal place for a polarizing filter, I didn’t use one because they can play havoc with blue sky banding in panoramas (I have a post on using polarizers here).