Tikal, in northern Guatemala, was once one the largest and most powerful of the Maya cities. Today it has been most taken over by jungle. 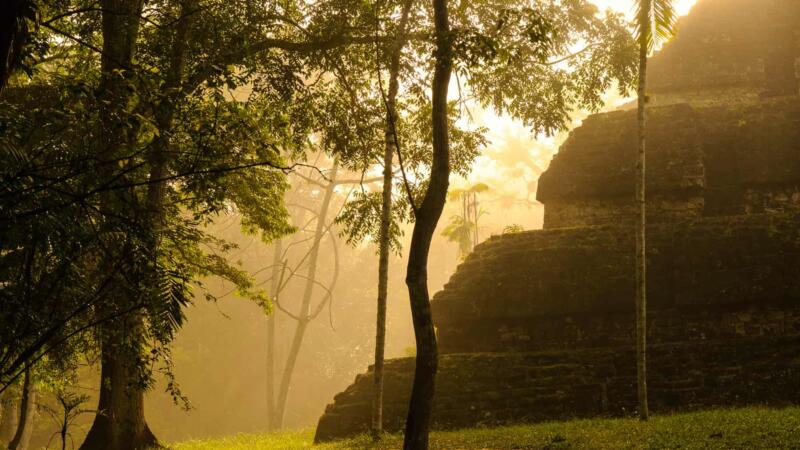 There’s a deep, guttural growl coming from somewhere out in the misty darkness of the jungle. Then there are more of them. And they’re loud.

We’re still hours before dawn, but it’s already hot and muggy. All around us is jungle. There’s only four of us–three of us, plus our guide. We’re armed with nothing more than flashlights and cameras. We’re on a rocky, unpaved track with moss-covered rocks that are slick from the overnight rain that is only now starting to let up.

A ways back along the trail we’d come across two guards sitting silently in the darkness, shotguns across their laps. The State Department warns that violent attacks have occurred in the Tikal ruins “particularly during the early morning sunrise tours of the ruins.” Without the guide there’s no way for us to get our bearings in the dark.

Jaguars and pumas call this jungle home. But thankfully, the source of these roars isn’t a pride of big cats with an appetite. They’re howler monkeys. They sure don’t sound it, but they’re harmless, if mischievous. Signs at the entrance to the park warn that one of their favorite ways to entertain themselves is by defecating on people walking below.

We’re walking in the dark to one of the largest of several pyramids that are part of this ancient city. We climb the steep wooden steps to the top. There, we sit and wait and listen.

Star Wars fan? Tikal was used as a filming location for Yavin 4 in the original Star Wars movie (A New Hope). In the shot where a Rebel lookout watches the Millennium Falcon landing on Yavin was taken on top of Temple IV looking east; you can see the tops of Temples I, II, and III poking up above the trees.

All we can see is thick mist. But we can hear the jungle waking up. The howler monkeys are joined by other, less fearsome-sounding cousins. Toucans flitter in the tops of the trees. UNESCO lists 54 species of animals and 333 species of birds here, contributing to a rich, and thankfully protected, biodiversity region.

As the dawn adds more light and the mist starts to lift ever so slightly, we start to be able to make out the treetops far below. We can see troops of spider monkeys, with their spindly limbs and tail, swinging from tree to tree.

In the midst of this rainforest, the ruins of the Maya civilization at Tikal have the kind of atmosphere one imagines of these ancient, mysterious places. It’s a far cry from the much more sanitized and trampled atmosphere of places like Chichen Itza or Tulum.

Somewhere out there in the mist is a whole city, long since abandoned. Huge pyramids, once painted bright colors, tower above the surrounding treetops, giant pedestals for kings and holy men to be that much closer to God than anyone else.

Tikal, in northern Guatemala in the trunk of the Yucatan Peninsula, was once one of the largest and most powerful of the Maya cities when it was inhabited between about the 6th century BC to the 10th century AD. The impressive stone pyramids and other structures are ample evidence of that. But in the thousand years or so since the city was abandoned, the jungle has swallowed the city. In some areas–but by no means all–archeologists have dug into the mounds of earth and trees to expose the stone buildings underneath. The pyramids served royal and religious purposes, but there are also residential quarters nearby to wander through. And if you know what to look for and how to read them, there are numerous stone steles around that pay tribute to important people and events, telling the story of this remarkable city.

In a few hours, this place will be teeming with tourists. But for now, we’re alone in this ancient Maya city.

Tikal is one of UNESCO’s World Heritage sites, not just for its human history but also for the biodiversity of the region. You can read more about the significance of the region here.

You will increasingly see it written as Tik’al, a more recent orthographical convention.

Take a hat, sunscreen, warm-weather rain gear, water, and a torch (flashlight). Facilities on-site are limited, although there are a couple of small shops at the park entrance.

This area is mostly tropical jungle and much lower altitude than the mountains of south-western Guatemala like Antigua and Guatemala City. Malaria and Dengue Fever are both in the area, so take mosquito repellent, any antimalarials your doctor recommends, and the usual precautions for such regions. Check the current CDC advice.

The State Department and British Foreign Office travel advisories both warn that there have been violent attacks against tourists on the roads to and from Tikal and within the National Park itself. Read the current advisories here and here.

To do the sunrise or sunset walks you’ll have to be staying at one of the lodges within the park itself.

The ruins are not well signed and quite spread out. You’ll get much more out of it with a knowledgeable local guide. The lodges and hotels can usually arrange one, or get in contact with a travel agent in the area.

Before you go, here’s a fun resource for virtually exploring the site.