These three chambers, between the Harem and the rest of Topkapi Palace, are where Ottoman Sultans met with their imperial councils to conduct affairs of state. 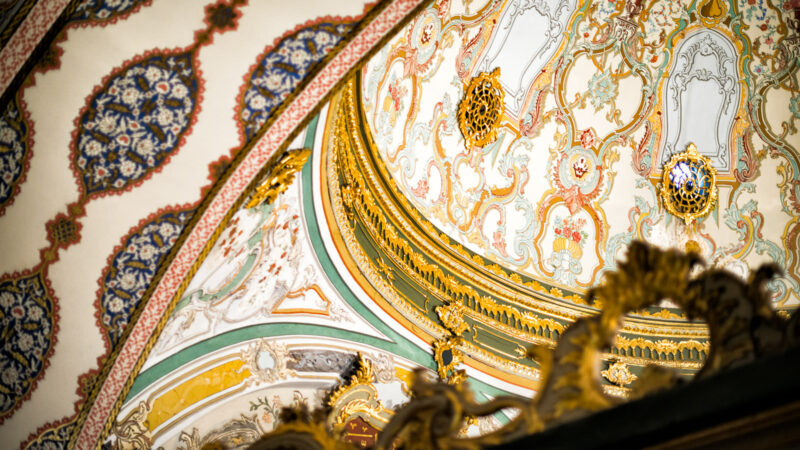 The Ottoman Empire was run from here. These three chambers, between the Harem and the rest of Topkapi Palace, are where Ottoman sultans met with their imperial councils to conduct affairs of state. It is also called Kubbealti (Kubbealtı), which means “under the dome”, and is located in the northwestern corner of the courtyard next to the Gate of Felicity.

The meetings here were surprisingly regulated, convened four times a week after the dawn prayers. A special golden window high on the wall of the main council chamber allowed the Sultan to observe the Imperial Council discussions. Accessible through the Tower of Justice, it was both symbolic of the role of justice in affairs of state and practical because it was easily accessible from where the Sultan and his family lived in the Harem.

For the Ottoman equivalent of a parliament or senate forum, the rooms are surprisingly small. These are very much about providing a venue; functional considerations were minimal. Long sofas line the walls for sitting, but the only other furniture is a small hearth in the middle of the room. Hanging from the center of the dome is a golden ball that signified the earth.

Two of the chambers are lavishly decorated, with distinctive Ottoman domes. Kütahya tiles line the walls and add the sense of occasion that the rooms deserve for their role in maintaining the mighty Ottoman empire. This isn’t the original council chambers building. It was replaced during the reign of Suleiman the Magnificent (Sultan Süleyman) in the mid 16th century.

Photos of the Imperial Council Hall at Topkapi Palace