U Bein Bridge has become one of Myanmar’s iconic landmarks. Spanning 3/4 of a mile, the foot bridge is reputed to be the longest teak bridge in the world. 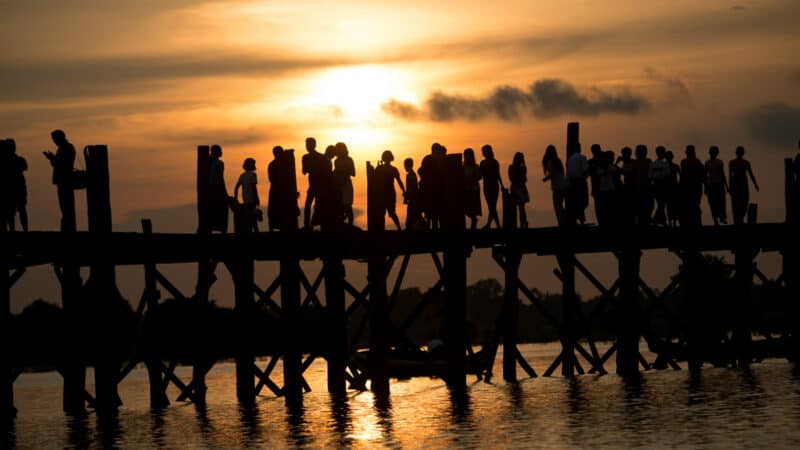 U Bein Bridge isn’t the sturdiest engineering structure you’ve ever seen, but that it exists—and has existed so long—is quite the marvel itself. It’s three-quarters of a mile long and is reputed to be the longest teak bridge in the world. It’s a footbridge, so there aren’t any cars or scooters to contend with, but since it has become one of the region’s leading attractions it can get jam-packed with tourists, especially at sunset.

The bridge spans the Taungthaman Lake near the ancient capital of Amarapura. Once the royal capital, it has now become absorbed into the city of Mandalay. The bridge dates to around 1850 and is named after the mayor who commissioned its construction, U Bein. (U is a Burmese honorific roughly similar to Mister, although it’s not automatic but rather earned, and it connotes someone respected in the community.)

The structure was originally built with reclaimed teak from a nearby palace, although some of the original pillars have since been replaced with concrete. But a surprising number of the wooden pillars remain in place and lend the bridge its rickety look.

The bridge is still heavily trafficked by local pedestrian traffic, but it’s also now a major tourist draw, especially at sunset. Small wooden boats chartered by tourists flow under and around the bridge and line up on the western side just before the sun lowers behind the silhouette of the bridge.

The western bank is jammed with vendors selling souvenirs, tour drivers killing time, and restaurants prepping food in the hope of catching some of the traffic coming off the bridge after the sun sets.

Photos of U Bein Bridge

Tickets. You don’t need to buy tickets. You can wander across at will. Recognizing the value of tourism, the government has installed a police presence.

Boat Charters. If you’d like to charter one of the small wooden boats (that come with a driver, of course), you can do it at the foot of the bridge on the western bank. At sunset, competition for boats can be tough, so a safer bet is to pre-book one–your hotel or guide can help arrange that. The boats aren’t big–they can fit 4-5 people and you can board them at the dock on the western bank or arrange for the boat to meet you at one of the landings part-way along the bridge.

Sunset. The highest chances of a clear sky are during the peak tourist months of January-February.