A Colonial Town in the Heart of Maya Yucatan

Valladolid is a place to stop and savor. A charming Spanish colonial town in the center of the Yucatán Peninsula, it’s within easy striking distance of Cancun and Merida. 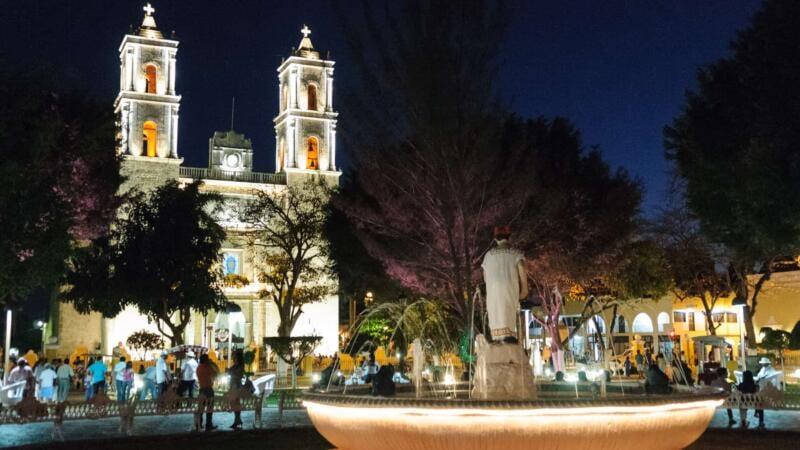 Valladolid is a place to stop and savor. A charming Spanish colonial town in the center of the Yucatán Peninsula, it’s within easy striking distance of Cancun and Merida. It makes for a pleasant, laid-back place to stop for a few days in its own right, but an added appeal is that it’s also a great base for exploring the nearby Mayan ruins of Chichen Itza and Ek’Balam, especially if you want to get the morning jump on the tourist buses rolling in from Cancun and Playa del Carmen.

Given its great location in the heart of Mayan Mexico, it’s a bit surprising that Valladolid hasn’t yet become overrun with tourists. The lack of an airport is one good reason. Merida and Cancun, both of which are bigger and have busy international airports, are more than happy to soak up the tourist dollars. But the result is that Valladolid itself remains quiet and relaxed.

The town was built by the Spanish on a Maya ceremonial site. For much of the time after that, the indigenous Maya population was repressed, something that has only been redressed in more recent times. Much of the money these days in Valladolid comes from being a financial and administrative hub for local agriculture.

Like so many Spanish colonial towns, Valladolid is laid out on a classic grid radiating from a central town square, in this case, the Parque Francisco Canton Rosado. And this being the Yucatan, there are no rivers or hills to speak of, so it’s an easy place to walk, drive, or ride. Around the town square are some comfortable hotels and restaurants, the town hall, and a 16th-century Spanish colonial Cathedral of San Gervasio with its twin steeples towering over the town. And if you’re lucky enough to be there for one of the seemingly endless streams of Maya celebrations, like the Queen of the Maya Festival, you’ll be in for a treat.

Wandering a little further, by car or bike, both Cenote X’kekén (also known as Cenote Dzitnup) and the Church of San Bernardino de Siena, with its convent next door, are well worth a visit.

Valladolid makes for a charming, convenient, and affordable stop for a night or two and if you’re headed to the northern Maya civilization ruins of Chichen Itza, Ek’Balam, or Coba, especially if you’re looking to get away from the tourist crowds of Cancun, Playa del Carmen, or the Maya Riviera. There are some charming and quite reasonably priced hotels right on the main town square–I personally like both the restaurant and accommodations of Meson del Marques Hotel–and just a few blocks away is a highly rated hostel, La Candelaria, which is in what was once a nunnery.

Valladolid is an easy drive from either Cancun or Merida; it’s about halfway between them.

A Colonial Town in the Heart of Maya Yucatan