HO CHI MINH CITY, Vietnam — The War Remnants Museum presents an important but one-sided history of the appalling legacy of the decades of war that have ravaged Vietnam. 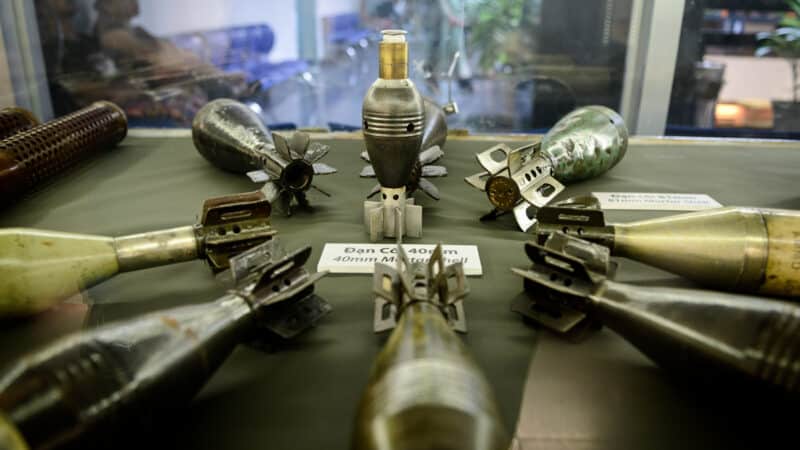 The scars aren’t just physical–although there are plenty of those. Vietnam may have defeated the United States, but it’s harder to say they won.

The War Remnants Museum in Ho Chi Minh City documents the costs of the war. It’s aimed squarely at foreign visitors–you won’t find many locals here. The tone isn’t one of victory, but one of victim. The museum amounts to an extensive catalog of the appalling legacy of war.

Outside the building is a range of American military hardware that had been captured or abandoned, much of it handed over to the South Vietnamese regime. There’s a F-111 fighter-bomber jet, Chinook helicopters, tanks, more planes, and a display of unexploded ordnance. Because so many of the items on display are American, if one was to squint and not read the text of the information boards, you could be forgiven for thinking this might be an American museum. It’s as if to say, “Look at all this technology and military firepower the Americans had. And yet they still lost.” That theme is reinforced inside with a table showing an accounting that shows just how much military hardware the United States poured in for its own use and for its South Vietnamese allies.

Outside the building there’s also a display of the gruesome prison conditions set up first by the French colonial government and then adopted by the South Vietnamese government. Southeast Asia is not renowned for the comfort of its jails at the best of times, and these were particularly inhumane. There’s a guillotine–a frequent symbol of the French colonial years–some of the brutal tiger cages used for punishment, and several original cells into which far too many prisoners were crammed.

Inside the museum consists of rooms dedicated to a particular theme. There’s one on the effects of the use of Agent Orange and Napalm by American and South Vietnamese forces with graphic photos, one on the legacy of unexploded munitions, one on “Historical Truths,” and another “Aggression and Atrocities.” There are showcases with American rifles and machine guns, American bullets and artillery shells, American uniform and packs, and a large exhibit featuring the photographs from war photographers around the world.

This is a museum run and sanctioned by the Vietnamese government and is an entirely one-sided affair, much of which falls squarely into propaganda territory. And inconvenient history is entirely absent–the museum does not, for example, detail the Communist forces’ treatment of those deemed “unpatriotic.” At the same time, there are basic facts that can’t be dismissed. The war had appalling consequences for the civilian population of Vietnam. Agent Orange and other chemical agents left a horrifying legacy. Unexploded ordnances continue to kill and maim people even today.

Yet there’s no real effort at objectivity. But the museum’s curators have gone to great lengths to create the illusion of it. It’s striking how American actions and words damned them and was used as fuel. Quotes by Senator Wayne Morse, a vocal critic of the Vietnam War on Capitol Hill, by Robert McNamara, Curtis LeMay, and President Eisenhower, are all featured prominently. And photographs, with their implication of “objective truth,” are used extensively throughout. They’re graphic and damning. And there’s a lot of them.

Throughout, the “patriots,” as North Vietnamese loyalists are called, are oddly absent. They are there in spirit throughout the museum, but there’s no real discussion of them or their methods–and certainly no celebration. They’re treated not as heroic but rather as stoic, as doing their duty for the greater good.

Photos of the War Remnants Museum

Captions on exhibits are in Vietnamese and English.

It’s not a big museum. You can easily move through it in an hour or two.

You’ll get more out of it if you read about Vietnam War before you go. Much of the text crosses squarely in propaganda territory, but it does so with actual evidence. It can’t simply be dismissed, but it also can’t be taken at face value. If you’ve done your own research, you’ll be better informed to make up your own mind.

On balance, the museum isn’t really kid-friendly. Kids will probably get a kick out of the planes, helicopters, and tanks, in the courtyard. The jail replica is disturbing, but not necessarily more so than a trip to the Tower of London. But the photos on the upper floors, showing the effects of Agent Orange and unexploded ordnance, are very graphic indeed and likely to be pretty disturbing for kids.