The Waterfront of Punta Arenas 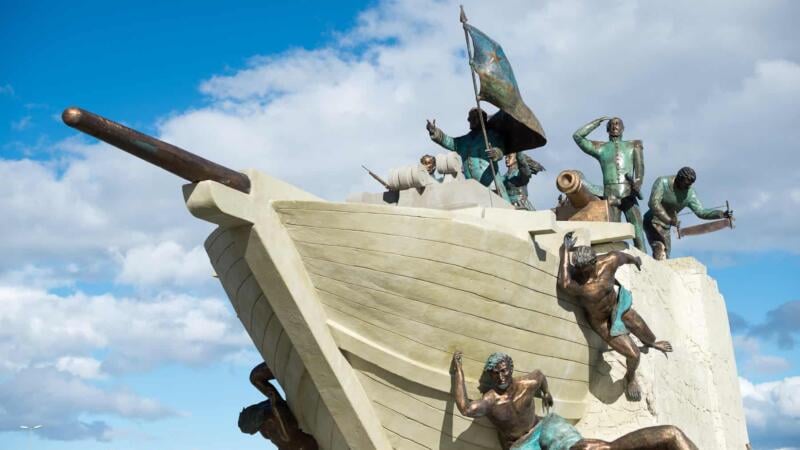 From the frigid fifties of south latitude, through the strait that was to honor his name, and across the Pacific, Magellan drove his little fleet through waters no European had sailed before. His route proved impracticable for the spice trade. The captain himself never reached home, and his heirs got not one ducat. Reviled in Portugal, defamed in Spain, Magellan left one legacy only–knowledge of the world as it is.

It’s not quite as far south as you can in Chile, but it’s close.

There are settlements further south. Ushuaia, in Argentina, is further south. And between Punta Arenas and the wild expanse of Drake Passage lies a number of big and small islands with more than a few inlets. But it is the largest town south of the 46th parallel well below the cities of Australia and New Zealand.

Punta Arenas, which translates as Sandy Point, is a town shaped by the sea–by trade and by exploration. Ferdinand Magellan, the 16th-century Portuguese explorer (sailing for Spain), may as well be the town’s secular patron saint. It’s not everyone who can claim to have fundamentally changed our understanding of the world. But Ferdinand Magellan did just that. He himself never made it all the way around the globe—he was killed in the Philippines en route—but one of the 5 ships his expedition set out with did.

Magellan was originally Portuguese but had changed his nationality to Spanish, all the better to get a commission, not to mention funding, from the Spanish king.

One of his defining contributions was in discovering a long-rumored sailing route connecting the Atlantic with the Pacific without going through the treacherous seas of Drake Passage. For Magellan and those bankrolling his expedition, it promised a faster route between Europe and the Spice Islands. And that competitive advantage meant more spices could be imported to sell to Europe’s booming appetite for spices.

Magellan stands atop the column in the central town square, and at one point the town was even called Magallanes (1927-1938). But most importantly, it’s the Straits of Magellan that make this more than a remote fishing village. The Straits provide an important link between the Atlantic and Pacific oceans.

The town has built a massive new statue on the waterfront of the Straits of Magellan to celebrate the explorer and the town’s maritime history.

Punta Arenas on the Map

The Waterfront of Punta Arenas