MOSCOW, Russia – In April 1961, Yuri Gagarin became the first person in space. The Gagarin Monument in Moscow is a an apt Soviet tribute to a Russian national hero. 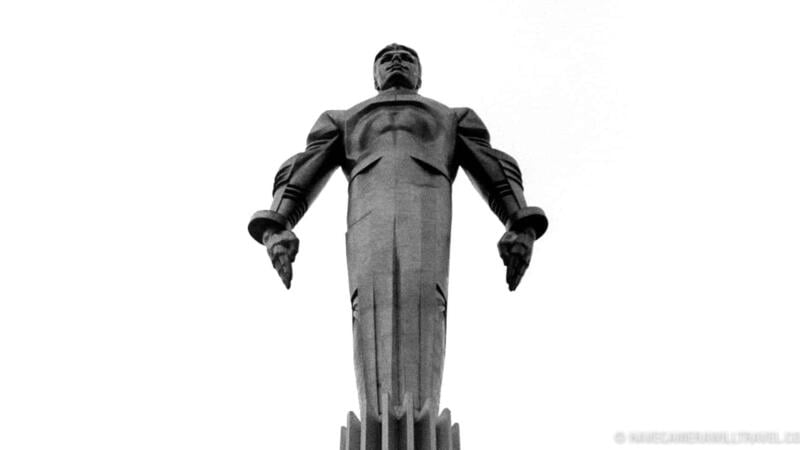 Yuri Gagarin is a Russian national hero. At a time when the space race was a bellwether of national prestige in the Cold War, then 27-year-old Gagarin became the first person in space on 12 April 1961, beating American astronaut Alan Shepherd beyond the stratosphere by almost a month. Soviet Premier Nikita Khrushchev famously compared him to Christopher Columbus.

Gagarin was surprisingly short–only 5 foot 2 inches–but that was an advantage in the cramped quarters of his five-ton spherical space capsule named Vostok, Russian for “East.” And for all the adulation and celebrity that came after his mission, Gagarin remained grounded. As he was described in his New York Times obit:

Yuri Gagarin was a rather quiet man, mild-spoken almost to a fault. He had intelligent, dark eyes and bushy eyebrows. His forehead was broad and his nose snubbed, and persons who knew him said he had the appearance and demeanor of “a typical Muskovite.”

Gagarin went into space only once and his single orbit of the earth lasted only 108 minutes, although he was the backup cosmonaut for Soyuz-1 in 1967. That he wasn’t selected for that mission proved lucky for him–it crashed on re-entry. Gagarin’s luck didn’t hold. He died during a routine training flight in a MiG-15 in March 1968. After his body was recovered it was cremated and his ashes were embedded into the wall of the Kremlin of Red Square in Moscow, not far from where Stalin is buried and where Lenin lies in his mausoleum.

Seymour Topping, one of the Moscow-based New York Times correspondents at the time, paints a striking picture of the disconnect between this genuinely impressive technological achievement and the more mundane daily struggles of Soviet citizens at home:

The flight, resounding evidence of the technological advance of Soviet society, brought a great outpouring of pride and happiness among the Russians. But the achievement also stood in glaring contrast to what was lacking in the everyday existence of the average Russian. Audrey [Seymour’s wife] recalls that on the day of the flight she could not find any eggs in the local open market or in the nearby shops. When I returned home from the Central Telegraph Office after filing a story on the epic space event, I walked up eight flights of stairs to our apartment because yet once again the elevator was not working.

I took this black and white shot in the mid-90s on Moscow’s Lenin Avenue on a cold, overcast, winter’s day. There’s no mistaking the Soviet styling of the design, but what you can’t tell from the photo is that this isn’t some run-of-the-mill stone or even marble statue; the 40-foot statue is sculpted from cast titanium, a revolutionary metal for the aviation industry (and, oddly, the statue was commissioned at a time when a shortage of titanium was posing a threat to the aviation industry). The statue sits on top of a 90-foot pedestal made of granite. It was designed by sculptor Pavel Bondarenko and architect Yakov Belopolskiy and unveiled in June 1980.