Polarizing Filter Shootout: Tiffen vs Hoya vs B+W vs Nikon

I’ve been putting some of the most popular circular polarizing filters (CPL filters) to the test. Here are some side-by-side results. 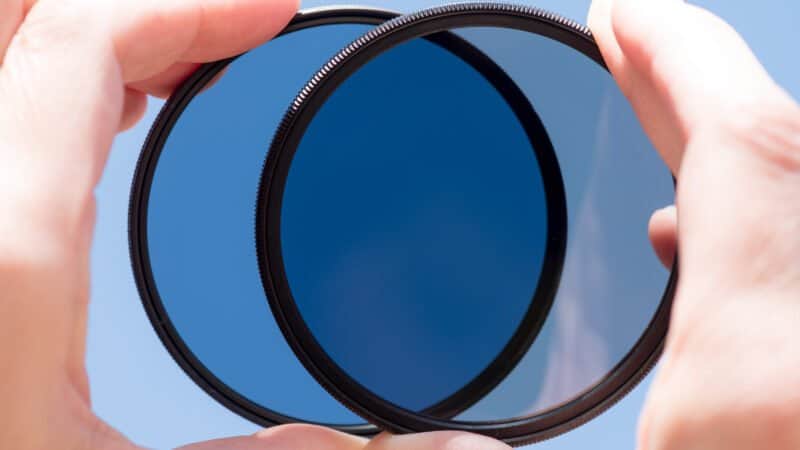 While I’ve been spending some time down at Washington DC’s Tidal Basin for the annual blooming of the cherry blossoms I decided to take the opportunity to do some side by side testing of polarizing filters (aka CPL filters).

In practice, polarizing filters are something I use less often these days. But they can make a dramatic difference, especially on skies and water.

First, though, if you haven’t used a polarizing filter before, one of the considerations to factor in is that they cut down the amount of light coming into the lens. Precisely how much varies filter to filter, but it’s generally somewhere around 1 to 2 stops. Cheaper filters tend to be on the higher end of that, whereas better-quality (and usually more expensive) filters tend to be around 1.2-1.4 stops. There are also CPL filters known as high-transmission, or HT, that block less light and typically have less of a polarizing effect.

Here’s an illustration of what that light loss looks like in practical terms. The first shot is without a polarizing filter. The second is with a polarizing filter but using exactly the same exposure settings (aperture, shutter speed, ISO, etc.) without compensating for the light loss.

Since I had all of the filters on hand, I shot a series of side-by-side tests. These are all on the same camera with the same lens with exactly the same exposure settings (including white balance). 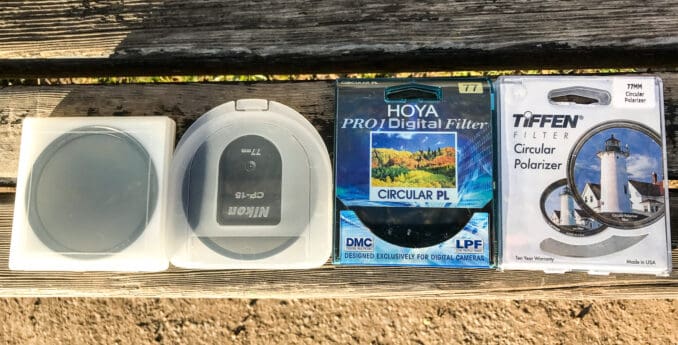 They were shot on a Nikon D810 with a Nikon AF-S NIKKOR 24mm f/1.4G ED lens, with the camera mounted on a sturdy tripod. The 24mm lens has a 77mm filter thread. As you can see in these examples, there are issues when using a circular polarizer on a wide-angle lens, but I did that deliberately because it also shows more clearly how aggressively the polarizing effect is being applied.

Because of the way that circular polarizing filters work, there can be some variance in the strength of the effect based on the rotation. And the “right” spot is something you just eyeball. I’ve tried hard to keep these consistent with the point of rotation where the maximum effect is applied, but it’s naturally an imprecise process. 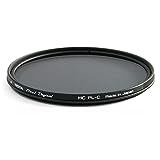 Hoya 72mm DMC PRO1 Digital Circular Polarizer Glass Filter
Check Price at Amazon
Hoya have traditionally targeted the consumer end of the market, aiming for good filters at affordable prices. This one includes a front thread, which is handy if you want to attach some other kind of filter or threaded accessory on top of it.

In use, I ran into an issue I’ve come across with other Hoya filters I’ve tried–a slight color shift. The results are a little muddier and not quite as crisp as the other filters here, and it’s a shade more aggressive than the others here.

Tiffen 77CP 77mm Circular Polarizer
Check Price at Amazon
Another company that has long aimed at the affordable end of the market, Tiffen started with filters but has since branched out into acquiring some other notable accessory companies like Domke and Steadicam. Tiffen actually puts out a whole range of polarizers, including a warm polarizer and a low-light polarizer. This one is their general-use model. It has a front thread; there’s also a slimmer version for wide-angle lenses that dispenses with the thread.

Considering its lower price point (Tiffen’s MSRP is $44.99), this one came as a nice surprise. While it has a slightly cooler color, its performance is remarkably good, rivaling even the much more expensive Nikon filter. The Nikon’s effect is a bit smoother, especially near the edges, but the Tiffen performs surprisingly well. For the price, it’s very hard to argue with.

B + W Circular Polarizer Kaesemann - Xtra Slim Mount (XS-PRO), HTC, 16...
Check Price at Amazon
B+W consistently make some of the best filters available. I’ve used a lot of their filters over the years and am yet to come across one that I didn’t think was excellent. Like the others tested here, this uses coated glass for protection and glare reduction. This one also includes a front thread.

This one is in their “high-transmission” range, which lets more light in but trades off against a lighter polarizing effect. That makes it a good choice for low-light situations where you need to squeeze out all the available light you can while still having a polarizing effect. On a wide-angle lens like the 24mm, that more subtle effect is an advantage because it doesn’t result in as much banding. And just in looking at this through the camera, I could see that its polarizing effect of this was less aggressive than some of the others–in bright conditions and scenes that don’t include large smooth regions ripe for polarizing (like the sky in this shot) it can be a little trickier to eyeball where to rotate the filter to.

Nikon 77 mm Circular Polar II Filter
Check Price at Amazon
Nikon are better known for their lenses, but they’ve always applied that outstanding expertise in working with optical glass to make top-shelf filters. They don’t tend to go in for the fancy model names or marketing, but you can count on a Nikon filter being very good. It includes a front thread.

This one definitely has a stronger polarizing effect than the B+W one above, but its optics are, as expected, excellent.

It’s worth noting that even though this is a Nikon filter, that does not mean you can only use it on Nikon lenses. It has a standard filter thread that can be found on most DSLR lenses, regardless of the brand of the lens.

There are, of course, other polarizing filters available, and as the opportunity arises, I’ll aim to add them to this list.

8 thoughts on “Polarizing Filter Shootout: Tiffen vs Hoya vs B+W vs Nikon”

Polarizing Filter Shootout: Tiffen vs Hoya vs B+W vs Nikon