What are the A1 and A2 Ratings on SD and microSD Cards?

You might have seen a new A1 and A2 speed ratings on some of the newer SD and microSD cards. So what do they mean? And when should you take notice of it? 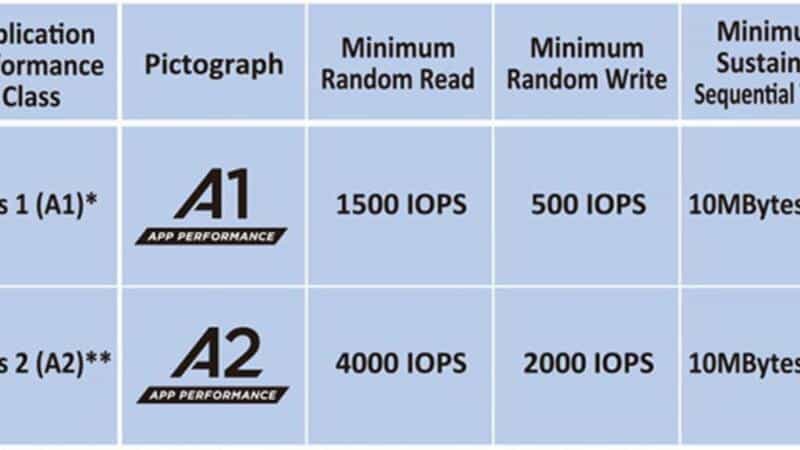 You might have seen new A1 and A2 speed ratings on some of the new SD and microSD cards. So what are they referring to, and should you take any notice of them?

The short version is that if you’re choosing a memory card for something like a camera, you can safely ignore the A rating and focus instead on the speed ratings that start with V or U.

If you’re using the card in a smartphone or gaming device, then the A rating is much more useful.

A1 and A2 SD Card Ratings Explained

SD and microSD cards have had several different speed rating categories. You see them in those small symbols and numbers on the cards and their packaging.

First, there was the speed class, which went from Class 2 to Class 10. Then there was the UHS Speed Class, where the cards fall into either U1 or U3. More recently, there’s a newer system, the Video Speed Class, that uses categories like V30, V60, and V90.

All of those are categories where the card is rated to meet or exceed a minimum threshold for sustained sequential write speed. Basically, that means they can keep up with a certain amount of data being recorded to them constantly. The obvious case where that comes into play is when recording high-definition (and ultra-high-definition (UHD)) video. The higher the quality and bitrate that the camera wants to record at, the faster the card needs to be to keep up with the stream of data coming at it. That’s why using a card that’s too slow in a 4K or 5K camera like a GoPro causes lockups and recording to stop–the card simply can’t keep up. One thing worth noting is that the actual speed you see in practical use is also very much dependent on the device you’re using it in, such as a camera or smartphone or another mobile device. In practice, the slowest link in the chain will determine the maximum speeds you get. So just because you have a very fast memory card doesn’t necessarily mean that you’ll see faster performance in practice.

So far, recording media like video and photos and audio has been the primary market that SD and microSD cards have been aimed at. So the speed rating systems have reflected that emphasis on recording high-resolution video.

But more and more, memory cards are being used to extend the memory of devices that run apps. Devices like smartphones and mobile gaming consoles. The apps that run on these devices interact with memory space differently. Rather than a stream of sequential data, they want to write a lot of small chunks of data wherever there’s space available. That’s known as random read/write (compared to sequential read/write that’s important for video).

As you can clearly see in the speed test results I’ve posted, a card that is fast for sequential reading and writing isn’t necessarily fast for random reading and writing. So just because a card might be able to record very high bitrate 4K or even 8K video doesn’t necessarily mean that it’s going to be a good fit for the different kind of use that applications might need.

As a result, the SD Association has come out with a new rating system specifically to categorize suitability for SD and microSD cards in application-heavy uses. It’s known as the Application Performance Class Specification, and it’s written in the form of A1 or A2. The idea behind it is that if you’re using the SD or microSD card to run applications on your mobile device, you can have confidence that a given card will be suitable before you buy it and will hopefully reduce the frustration of users buying cards blind that simply aren’t well-suited to running apps.

So far, there are only two designated classes: A1 and A2. The SD Association will add more as they’re needed. The thresholds to meet these categories are:

To display the A1 symbol, a card must meet or exceed these thresholds:

For the A2 category, it should be able to do at least:

The “IOPS” here stands for input-output access per second. It’s a different measure than we’re used to with memory cards, where the speed has typically been measured in megabits per second or megabytes per second in keeping with how video bitrate is measured and visual media recorded to the card. But the IOPS measure is more meaningful for measuring the kinds of operations that apps do.

You’ll also notice that the specification also includes a minimum requirement for sequential write. The 10MB/s threshold corresponds to a Class 10 video speed rating, which is too slow for many of today’s cameras that record 4K, 5K, or 8K video.

Is the Application Performance Class Specification Relevant to Digital Cameras?

Not really. At least, not yet. If mobile cameras end up evolving into more app-heavy devices, maybe it will be more relevant one day. But we’re not there yet.

It’s also worth pointing out that the A rating is a parallel rating system to the V and U systems. What I mean by that is that it doesn’t replace them, and it’s entirely possible–even likely–to have a card that carries both the A1 rating and a V30 rating or an A2 as well as a V90 rating. They’re referring to two different things.

What are the A1 and A2 Ratings on SD and microSD Cards?