There are several cloud-based image optimization services available for Wordpress. I put ShortPixel through its paces to see how to stacks up to the competition. 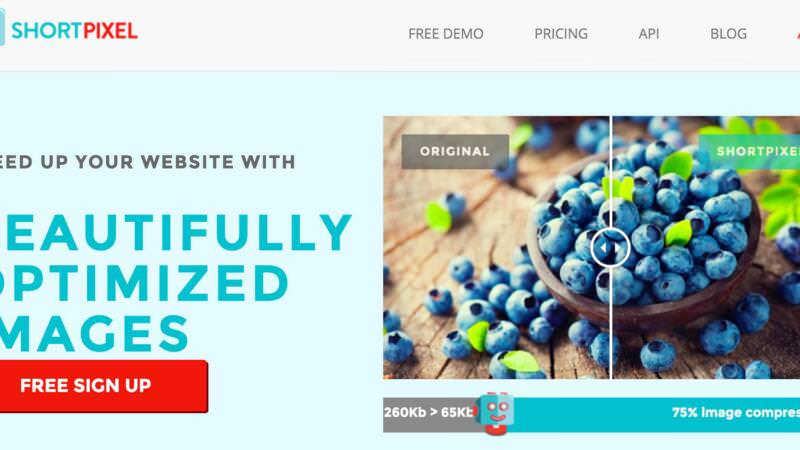 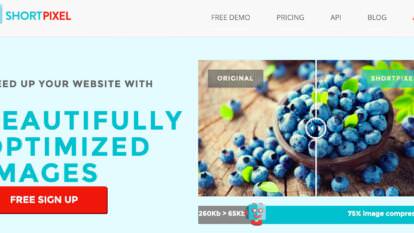 There are real, practical benefits to making your site faster. Faster websites keep visitors happy and Google happy. And if you want to cut to the chase, that translates to better SEO, better search rankings, and more traffic. That’s more true than ever now that Google is officially using Core Web Vitals as a ranking factor.

There are all sorts of ways to speed up a WordPress site. Upgrading to a faster server, using a CDN, and applying sophisticated caching are all great steps. But one of the easiest–and often one of the cheapest–is to reduce the size of the images that are displayed on your site.

I don’t mean reducing the display size. Photographers usually want to display large images. But image files have a lot of superfluous data in them that add bloat to the filesize. By removing that unnecessary data, you can make the filesizes dramatically smaller, and make your pages download much quicker, all without any visually detectable quality loss.

I’ve been doing an ongoing series on some of the best image optimization services and techniques. Here I’m focusing on one I hadn’t heard much about before: ShortPixel.

ShortPixel is a web service by a small team based in Romania. They make a WordPress plugin and run the cloud image optimization service that the plugin connects to. And having used ShortPixel now for some time on all my sites, I’ve been really impressed with the team’s chops. They really know their stuff and aren’t content to sit back on their laurels; they’ve been leading the pack with new features, optimizations, and support for up-and-coming features like AVIF images.

ShortPixel has a free trial where you can try it out on 100 images per month. And if you decide you like the results, you can upgrade based on the number of images to be processed per month.

I’m focusing here on using ShortPixel with WordPress, but it’s entirely possible to use the core optimization service with other CMSs or websites. That will involve some coding on your part to make use of the ShortPixel Developer API.

The advantage of doing the crunching in the cloud is, firstly, that you don’t need to install special utilities on your server, which many web hosts won’t let you do anyway, and secondly, that it doesn’t consume any of the CPU or RAM of your server. It also means that the process can be vastly simpler because the cloud service is taking care of it. The disadvantages are that you have less direct control over the optimization tweaking, and it can take longer because each file has to first be uploaded to the cloud service and then downloaded again. For most users, a cloud-based service is going to be the best option.

The system supports JPG, PNG, and GIF images (including animated), as well as PDF docs.

The WordPress plugin is itself free, but the plugin won’t do anything by itself without connecting to the ShortPixel cloud service, which is where all of the heavy lifting actually happens.

There is a free plan for the cloud service, but it’s limited to only 100 images a month. That’s not a lot when you factor in the derivative thumbnails that WordPress generates automatically when you upload an image. For most users, that’s enough to get a sense of whether it’s going to work for you, but unless you post very infrequently, it’s probably not going to be enough.

To process more than 100 images a month, you’ll need to buy credits. There are two ways to do that: through a monthly subscription or with a one-off purchase of a credit bundle.

When looking at the pricing options, it’s important to remember that images processed applies not just to the image you upload but also to all of the derivative versions that WordPress creates for thumbnails, etc. ShortPixel does include the option not to include these derivative thumbnail versions in the processing, but by not processing them, you’re excluding the very images that WordPress itself is most likely showing on the web. So to really get much benefit from the optimization, you’re going to want to include the derivative thumbnails.

The monthly plans start at $4.99 for processing 7,000 images per month and go up to as many images as you’re likely to need. Need to optimize 16 million images per month? They’ve got you covered.

And there are also credit bundles that don’t require a recurring subscription. You simply buy a bunch of credits–10,000, 30,000, or 50,000–and use those until they run out. There’s no time expiration on them. It’s a particularly useful option if you’re looking to optimize the images on an already established site for the first time or if you just want to avoid yet another monthly subscription charge.

Whichever option you choose, you’ll be given a single API license key that you can use on multiple sites.

The free WordPress plugin is available here. It installs just like any other plugin. Once it’s activated, you enter your API license key in the plugin’s settings panel. 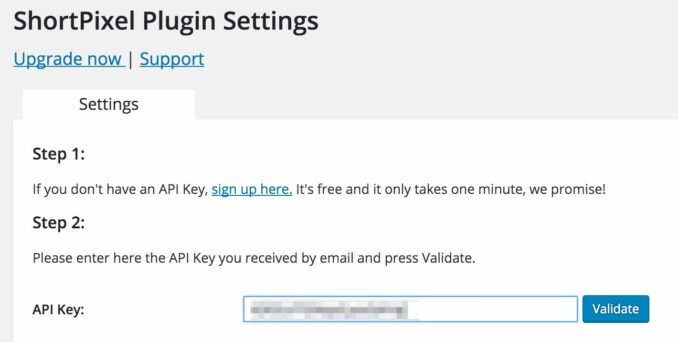 Once you’ve added your API license key, the actual settings options will appear. It’s there that you can choose things like lossy or lossless optimization, whether to process the WordPress-generated thumbnails, and whether to keep an untouched version of your original image. 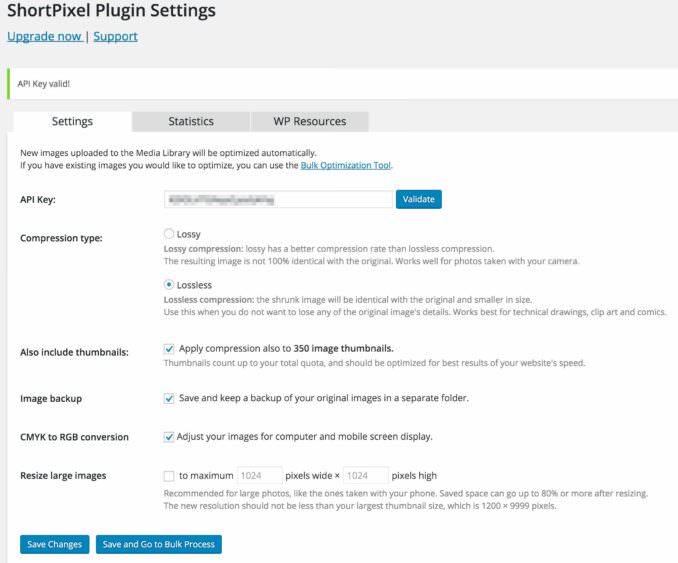 Once you hit the bulk optimization button down at the bottom, it’ll start doing its thing. It shows you a progress meter while it’s going, including how much each image is optimized. How much optimization you get depends on a number of things, including whether you’ve chosen lossy or lossless compression and what settings the original file was saved with.

Keep that tab open while the bulk optimization is going on. If you close it, the process will stop. But you can continue using WordPress or your browser normally so long as you use a different browser tab.

Once it’s finished, you can see the overall results in the Statistic panel of the plugin’s Settings page. 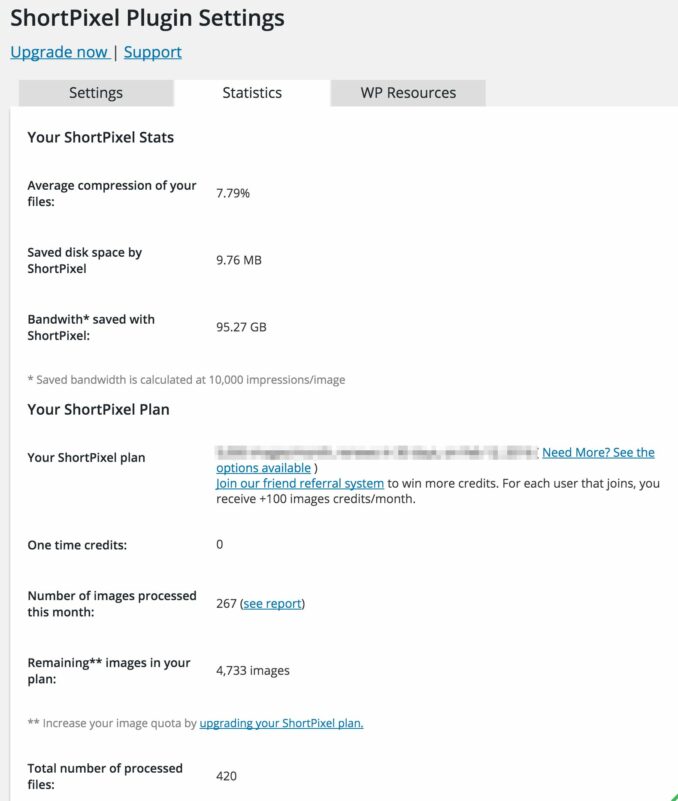 The plugin works with your existing Media Library, so you just upload and manage images the same way you have been–there’s no need to use a special uploader or library.

If you’re using something like NextGen, which uses its own kind of media library and saves files in a different location, there’s currently no way for ShortPixel to process those images.

ShortPixel vs. Optimus vs. Kraken.io

There are a number of options when it comes to optimizing images in WordPress. Two that take a similar approach in approach, pricing model, and ease of use are Optimus and Kraken.io.

All can be used on multiple sites, offer lossless and lossy optimization options, have batch automation, and have WordPress plugins that handle the optimization silently in the background. Both are easy to use. The compression ratios you get out of each of them are pretty similar, because they rely on basically the same toolbox of utilities under the hood. If you really want to get your hands dirty with fine-tuning those even further, you’ll need to step up to something more complicated (but also more powerful) like EWWW Image Optimizer Cloud.

But there are important differences. ShortPixel’s pricing model is based on a number of images processed. Optimus’s pricing structure is a flat-rate price for an annual license to process an unlimited number of images, and Kraken.io’s is based on the amount of data. If you’re looking to process large numbers of JPGs or PNGs, Optimus will work out much cheaper over the course of a year.

One criticism I have of Kraken.io is that it doesn’t have the option to leave the originally uploaded image untouched. Both ShortPixel and Optimus have that option.

Overall, all three services perform well. If you’re only working with JPG and PNG images, the key decision really comes down to whichever pricing model works best for you.

ShortPixel now supports the generation of WebP and AVIF, both of which are considered next-generation fonts for the purposes of Google’s Core Web Vitals. There are additional charges (in terms of credits) for creating them.

Overall, I’ve found ShortPixel to perform well. The optimization results are in the expected range according to the settings used, and I’ve not run into any glitches in the processing. In sum, it’s easy to use and effective.

So much so, that I’ve switched to ShortPixel on all my sites now. It’s not just the matter of comparing optimization results (although ShortPixel ranks among the top few in my tests). One of the things I’ve been most impressed with is that the team behind ShortPixel are really enthusiastic about creating useful new features and optimizations. I like that they support both WebP and AVIF. Their thumbnail regeneration plugin has become my go-to, displacing some of the more established plugins I’d been using in my toolkit for years, and their Adaptive Images Plugin is shaping up to be really useful for serving just the right type and size of image for all devices and visitors to your site.

So, in my experience, ShortPixel is both easy to use out of the box, but it also caters really well to website owners wanting to fine tune and further optimize their sites.

You can find my reviews of some of the other image optimizer alternatives here.

How to Get ShortPixel

There are two parts to setting up ShortPixel on a WordPress site (there are other options for non-WordPress sites, too).

The first is that you’ll need to install the ShortPixel Image Optimizer free plugin from the WordPress plugin repository.

The second is that you’ll need to connect to the ShortPixel cloud service. That’s where all the optimizing magic happens.

ShortPixel has a free trial where you can try it out on 100 images per month. And if you decide you like the results, you can upgrade based on the number of images to be processed per month. You can pay monthly, but if you pay for a year up-front, you get 2 months free. They also offer one-time credit packs that are useful for one-off renovations to the site, such as switching thumbnail sizes or changing themes.