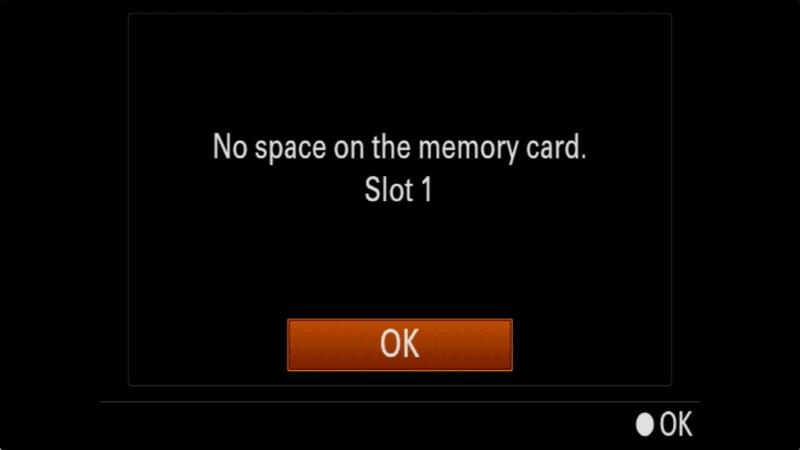 The Sony a7r iii has two SD memory card slots. You have quite a bit of control over how they’re used. For example, you can prioritize one, designate one for movie files, or set it up to mirror image.

They’re the types of things that are pretty standard on top-of-the-line cameras these days, but there was one specific setting on the Sony that caught me by surprise and temporarily halted my shooting while I tried to figure out the solution. It might have been an obvious fix to some shooters, but it wasn’t for me.

I had two memory cards inserted. With 85-megabyte RAW files, filling up memory cards is an occupational hazard with the a7r iii. But after filling up one, I was getting the error message at the top of this page that reads “No space on the memory card. Slot 1.”

It’s a showstopper error–while it tells you what the problem is, it’s not the least bit helpful in steering you toward a solution. And yet you can’t keep shooting until you fix it. Sure, you could physically swap out the memory card, but you shouldn’t have to when the camera has two memory cards.

In fact, you don’t have to do that. But the catch is that the default setting on the a7r iii is for it not to roll over to slot 2 when the card in slot 1 is empty. I assumed that it would.

It’s not complicated to change the setting so that it does roll over, but it did initially take me some time on-site scrolling through menu options trying to find where to change the setting. So I’m posting it here in the hope that it helps someone else (and probably me again, next time when I forget).

You can find the relevant menu item on the menu system on the back screen under the general setup tab (the toolbox icon). It’s the sixth page “Setup6”, and the setting you’re looking for is called “Rec. Media Settings.”

Once you drill down to that, you have some submenu options. Among them is the “Auto Switch Media” option. By default, it’s off. Switch it to On, and you’ll now have it roll over automatically to Slot 2 when you fill up the card in Slot 1.

As I said, it’s not complicated. But if you’re fumbling around in the menu system trying to find where to change it, hopefully, this might help. I do find it a bit odd that it’s not set to automatically rollover by default and it caught me out the first time, but now I leave it on the automatic switch setting.