Twitter has a built-in way to make your photos accessible to visually impaired users by adding image descriptions. Here’s how to enable and use the feature. 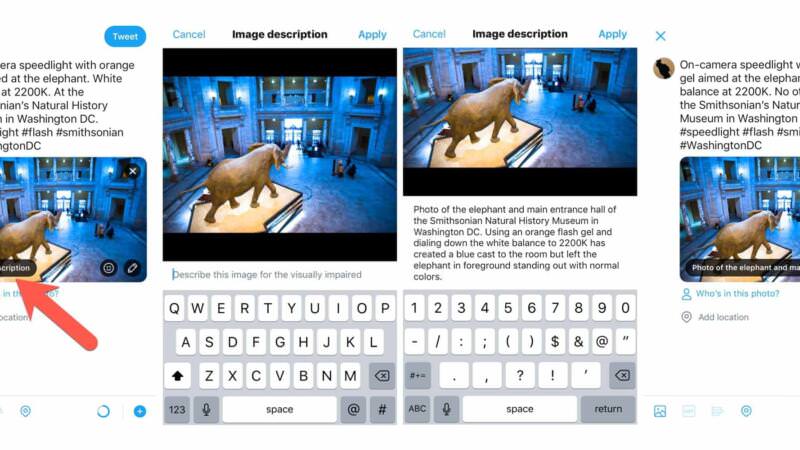 Twitter started as text-only and is still very text-centric. But it has become more and more visual, especially since link preview thumbnails and embedded images have been built into the core Twitter app rather than having to rely on third-party services. Other social media services are better suited to sharing photos, like Instagram, but sharing photos on Twitter has definitely become easier and more common.

But that new visual element adds accessibility challenges. Visually impaired users who rely on text-to-voice services–or even others who use text-to-voice readers like Apple’s VoiceOver service for any other reason–might be missing out on a significant part of what you’re trying to say.

Even if visually impaired users can’t enjoy the full visual impact of your images, you can still meet them partway and help them to appreciate the message, story, joke, or observation that you’re trying to share in your photos on Twitter. It’s done by turning on an option that’s already built into Twitter: image descriptions.

These are basically text captions for your photos. Or if you’re used to editing websites, these are the equivalent of image ALT tags. On Twitter, they run in addition to the usual text and don’t cut into your character limits. (They have their own separate limit of 420 characters).

Here’s a quick rundown of how to enable and use Twitter image descriptions.

The feature is built right into Twitter, but it’s not enabled by default. You can do that through the mobile app r through the web version. For our purposes here, I’m going to demonstrate using the Twitter app for IOS. The process is fundamentally the same for Android and on desktop browsers, but if you like you can find specific detailed instructions for those here.

1. Open the Twitter app and tap on your profile picture to open the settings.

How to Add Descriptions for Your Photos on Twitter

After you’ve enabled the option in your account to create image descriptions, you can add them when you go to post a photo to Twitter. It’s also worth noting that the descriptions only work for photos–not for GIFs or videos.

1. Compose your tweet as your normally would and add a photo. You’ll see a new link overlaying the image that says “Add description.” Click on that.

2. You’ll then get another box where you can enter the description.

Ideally, this should describe the image as though you’re explaining what it is for someone who can’t see it. You have up to 420 characters over and above the characters you use in the main tweet.

3. When you’re happy with the description, hit Apply. You’ll then go back to the preview screen, and it will now include the beginning of your image description text.

Is There Any SEO Value to Adding Twitter Photo Descriptions?

The primary reason the image description feature exists is to make photos on Twitter more accessible to users who are visually impaired. But it’s reasonable to wonder whether it might also offer some SEO benefit as well. Or benefits for Twitter image search, for that matter.

As always, it’s pretty hard to know with any confidence what the search engines are using in their secret sauces, and I don’t know of any large-scale testing that has been done on the topic. So we’re really just guessing.

Including a Twitter image description is unlikely to magically propel a tweet to the top of the search results. But it seems logical that Twitter’s own internal search and ranking algorithms would use that useful information.

At the very least, including an image description to your Twitter images can’t hurt. But it’s worth doing because it helps some users, not because it might offer some SEO benefit.

The description feature applies to sharing images. It’s not available for some other image types on Twitter, such as the banner image.