Vanguard has a new VEO collection of travel tripods. I’ve been trying out the VEO 235AB, the model in the middle of that range. 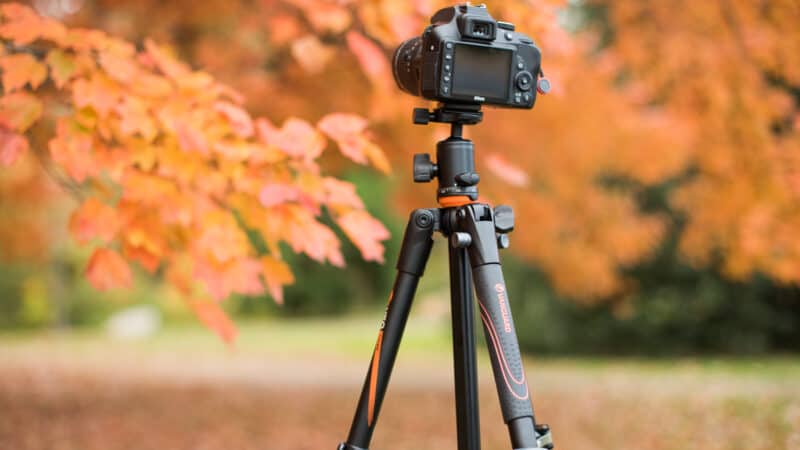 Vanguard has recently launched a new line of tripods, monopods, and backpacks designed for travel. They’ve called it the VEO Collection, and it currently includes four different sets of legs–three sets of aluminum legs of varying strengths and sizes and a set of carbon fiber legs.

The one I’m looking at here is the VEO 235AB Tripod. It’s the second-smallest in the range. The review sample I’ve been trying out was provided by Vanguard and B&H Photo.

It’s a lightweight aluminum travel tripod with five leg extensions. It has a maximum load capacity of 13.2 pounds, or 6 kg.

The legs fold out with a ratchet system operated by a gray button at the top of each leg. They can lock at three angles, from the traditional upright tripod stance to splayed wide to shoot low to the ground. Each leg can be angled independently.

When the whole thing is folded up for travel, it packs down to a shade under 15 inches (about 38 cm).

The legs consist of five sections that telescope out and lock in place with flip locks. I generally prefer twist locks, but there are two advantages to the older approach of flip locks. One is that it’s much easier to adjust the tension of locks, and there’s a standard hex key (or Leg Tension Adjustment Tool, as Vanguard calls it) included in the box that works with these locks so that you can adjust the tension as you like and tighten them if they loosen over time.

The other advantage, which is a lesser issue, is that with flip locks, it’s easy to see visually which are locked and which aren’t. When there are multiple sections in these extendible tripods, it also means there are a lot of locks and the risk for some of them not to be tight. On a five-section tripod like this one, for example, it means twelve locks on the legs along before you even get to the center column and head.

A downside of flip locks is that they’re often a bit bulkier can have more sharp edges to catch on things when you’re on the go. They can also be a bit more finicky to manipulate, especially with cold hands or wearing gloves.

The feet have retractable steel spikes and rubber. They’re not removable.

Like many of the others in the current generation of travel tripods, it packs down for travel into a very compact package. But whereas many tripods have mechanisms for the legs to pivot and fold over the center column, this one pivots the center column instead. It means that the joint at the top of the legs can be simpler.

The center column, then, is the part that needs to fold out, and there’s a small bronze button that locks it all in place. There are other tripods that take this approach of folding the center column rather than the legs–the Benro GoTravel 2, for example–but in principle, I prefer the simplicity of Velbon’s solution over the patent-pending approach on the Benro because there’s less to go wrong. In practice, though, there’s a surprising amount of movement at the joint–it’s an area where there’s definitely room for improvement.

There’s no hook on the bottom of the center column upon which to hang weights to add stability in breezy conditions.

It comes bundled with a tripod head. The one I’ve been using, the VEO 235AB, includes a ballhead (the AB on the end stands for aluminum and ballhead). There’s another variation that has the same legs but comes with a panning head (model number is 235AP).

It’s a pretty standard ballhead design, with an Arca-style quick release plate (it comes with a plate). There’s a panning base that rotates through 360° on its base and a large lever lock to clamp down on the ball. On top, a small knob on the side of the base plate clamps down on the quick release plate. There’s a small bubble level on the baseplate.

The ballhead is also removable, so you can swap it out for pretty much any other standard tripod head if you like.

This is a capable entry-level tripod. It works well with mirrorless cameras and small DSLRs like the Nikon D3500. But if you’re using anything larger or heavier than that, you’ll probably want to look at something stronger and more stable. Vanguard has their own VEO 265AB, for example, which is the next one up in the range. Here are some other ideas.

And even with smaller cameras, using a light tripod like this involves a bit of technique and care to keep things still. Keeping the extensions to the bare minimum for the shot maximizes the stability—the more it’s extended, the more leverage and flex there is. Using a cable release or self-timer minimizes vibration; same with mirror lockup for DSLRs that have it.

Overall, it’s reasonably well made, and I confess I’ve never seen a tripod made in Myanmar before. But one wouldn’t expect a sub-$150 tripod to offer the refinement of those that are twice the price or more, and there are some areas where things could be improved. There’s more movement in the center column joint than there should be, for one. And there’s a reasonable amount of flex in the legs, especially with the very thin bottom extension.

But if you’re looking for something simple, inexpensive, and highly portable, the Vanguard VEO 265AB comes at an attractive price and is well worth a look.